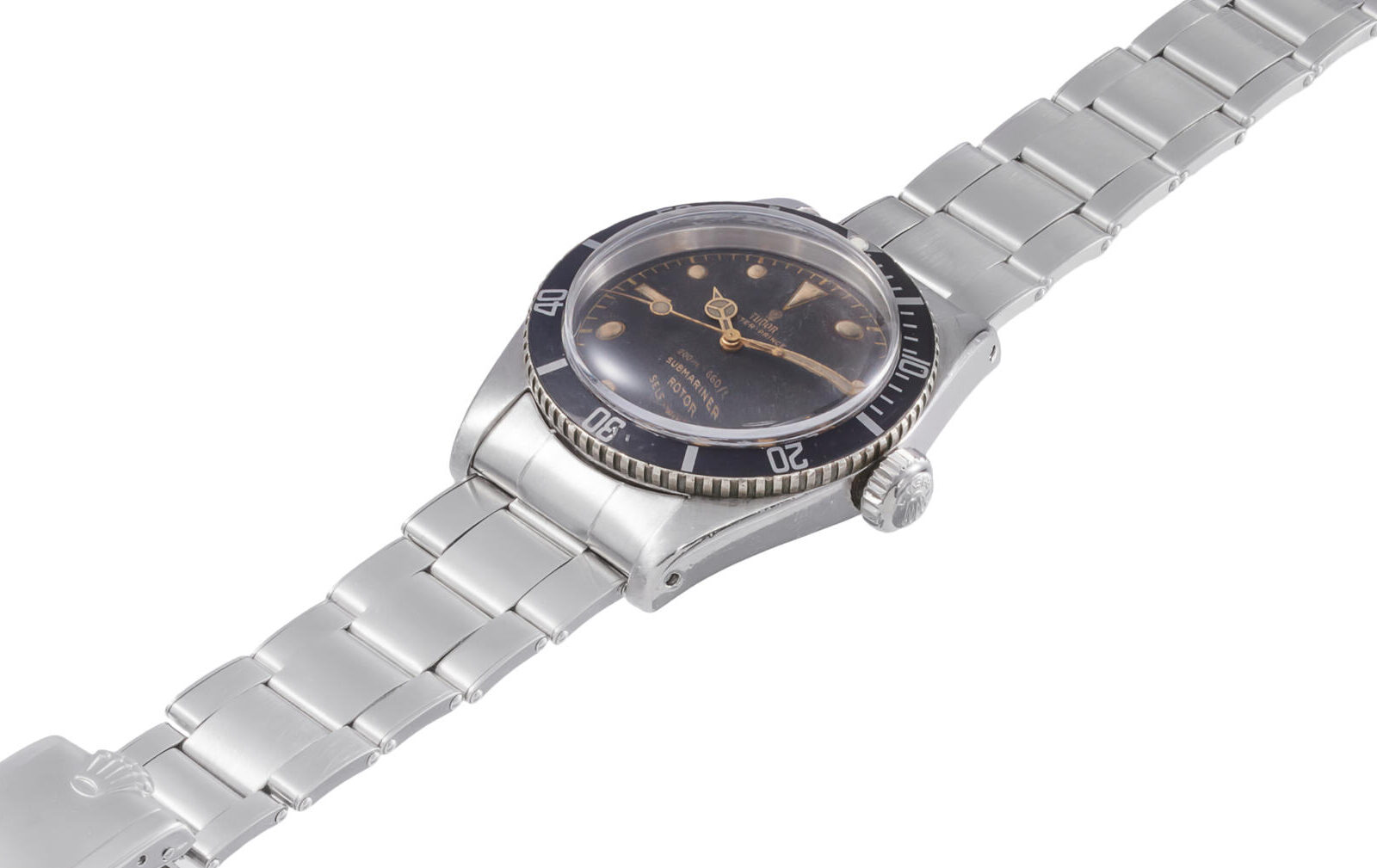 Paddles Up – Hammers Down: November 2020

The autumn sales are in full swing and there are some cool Tudors on the block...

Phillips Hong Sale is being held on the 29th November and there are a couple of nice vintage chronographs and a cool modern Black Bay. The first watch is Lot 951, which is a reference 7159 Monte Carlo from 1972. These 7100 series were the second iteration of Tudor chronograph and retain many features of the original Homeplate chronos including the orange, grey and black colour scheme, robust 40mm case and the unique crystal with horizontal cyclops at six o’clock. The 7159 features an engraved steel tachymeter bezel and has the elongated isosceles triangle stop watch hand.  The bezel looks to be in great condition, with some evidence of the original brushing and crisp edges. 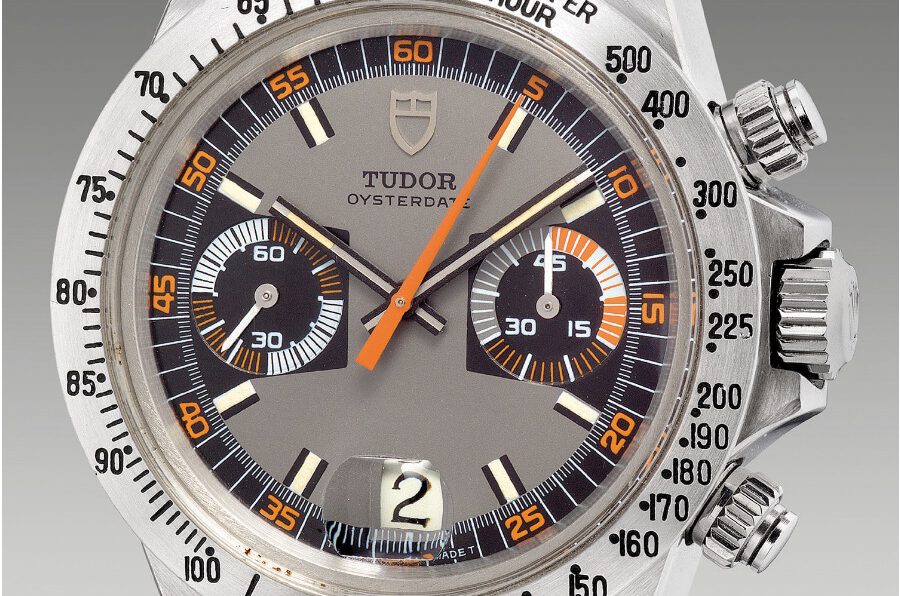 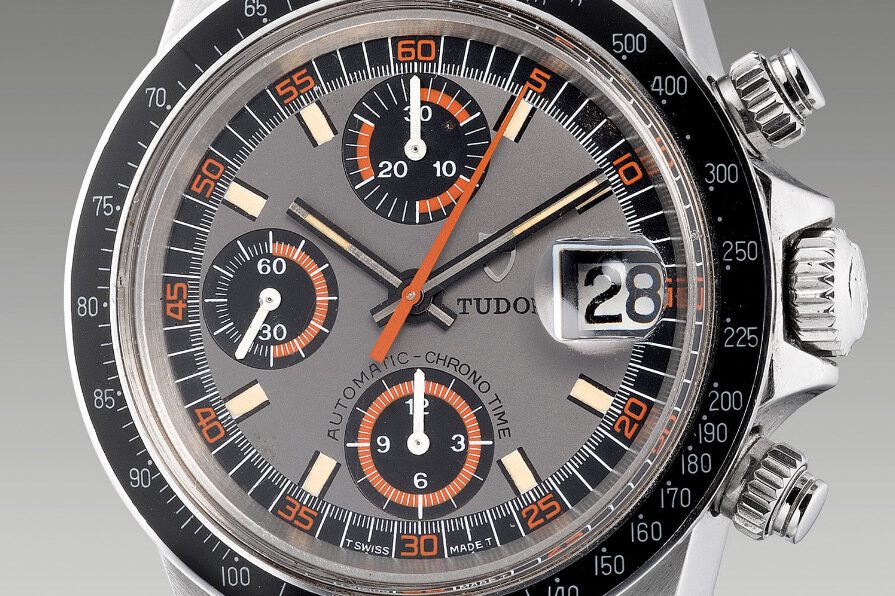 In 1976 Tudor unveiled their first automatic chronograph, which was a coup for Tudor as it was 12 years earlier than the first automatic chronograph from Rolex (the 16520 Daytona was launched in 1988). Due to the inclusion of the automatic winding rotor, the case was made extra deep which led to collectors calling these watches the Big Blocks. Some of the earliest models featured exotic dials, sometimes called Monte Carlos, and these watches are great value still in my opinion. Lot 952 has a cool orange, grey and black dial but with three sub dials, which was another change on the Big Blocks. The watch is fitted with a black plastic tachymeter bezel and has a solid link Oyster bracelet with the correct reference 589 endlinks. 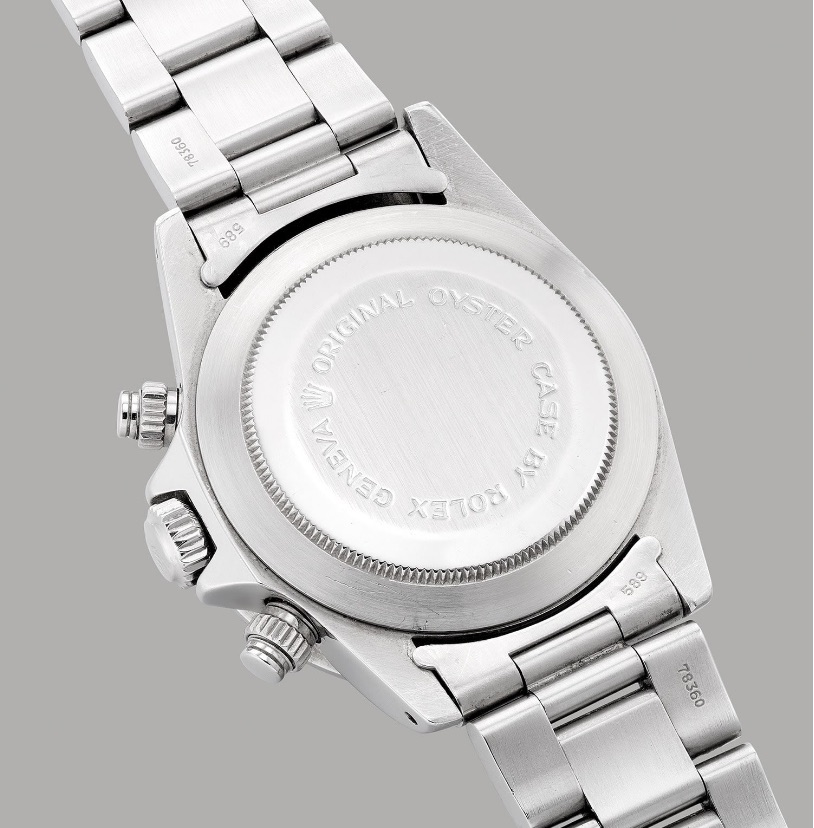 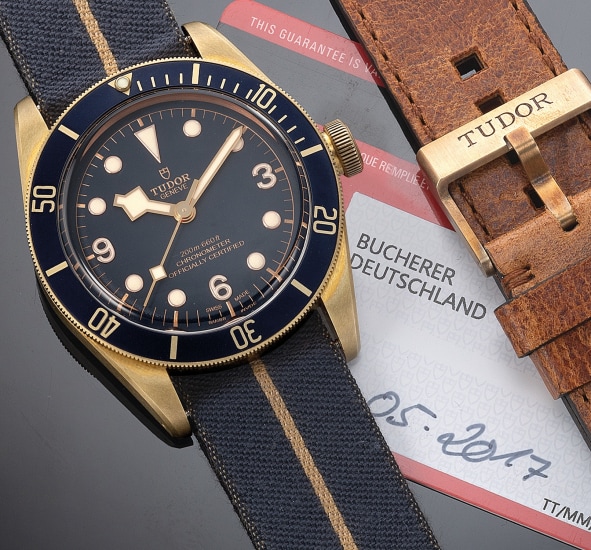 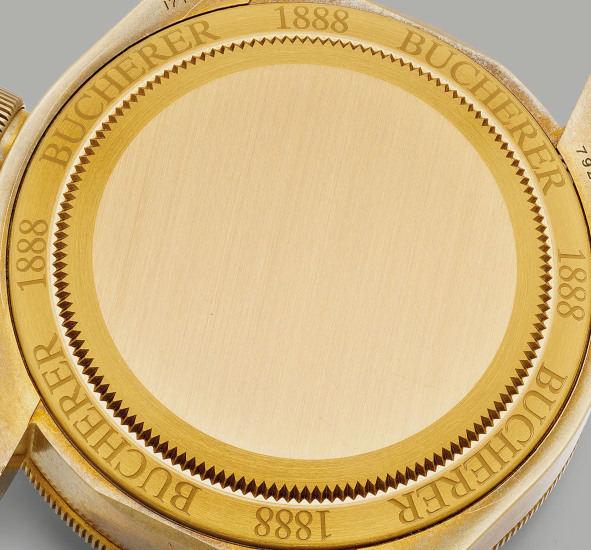 There is always something about a limited or special that gets Tudor Collectors hot under the collar! The Bucherer Blue edition Black Bay Bronze is one of these pieces and I’ll be interested to see ow it does, especially considering the amazing price the Harrods Edition sold at the Phillips X Blackbird sale a couple of weeks ago. The Bucherer Blue Black Baty was made to celebrate the 130th anniversary of the Swiss retailer and has become an instant classic with collectors, especially those living a long distance from Europe. Featuring a unique-to-Bucherer blue dial, bezel and strap this striking watch will find a great new home I’m sure. And there’s no reserve so get your paddle ready!

The Racing Pulse sale on December needs little introduction, thanks to the inclusion of a couple of incredible watches, one of which is Paul Newman’s personal 6263! And the chrono excitement doesn’t end there, thanks to the inclusion of a black dial Homeplate; one of the most sought after Tudors ever! Lot 90 is a reference 7032 with steel engraved tachymeter bezel and manual wind movement. The black dial looks to be in great condition as does the rest of the watch. The truth around these black dials is murky at best. In my mind they were very early replacement dials sent to to remedy the fact that the grey dials began spotting early on in their lives. I’ve written about this on Tudor Collector before and I think its entirely possible that dealers sold them new in the early 70s with the option of either colour, as swapping dials at point of sale was common in the 60s and 70s for both Rolex and Tudor watches. 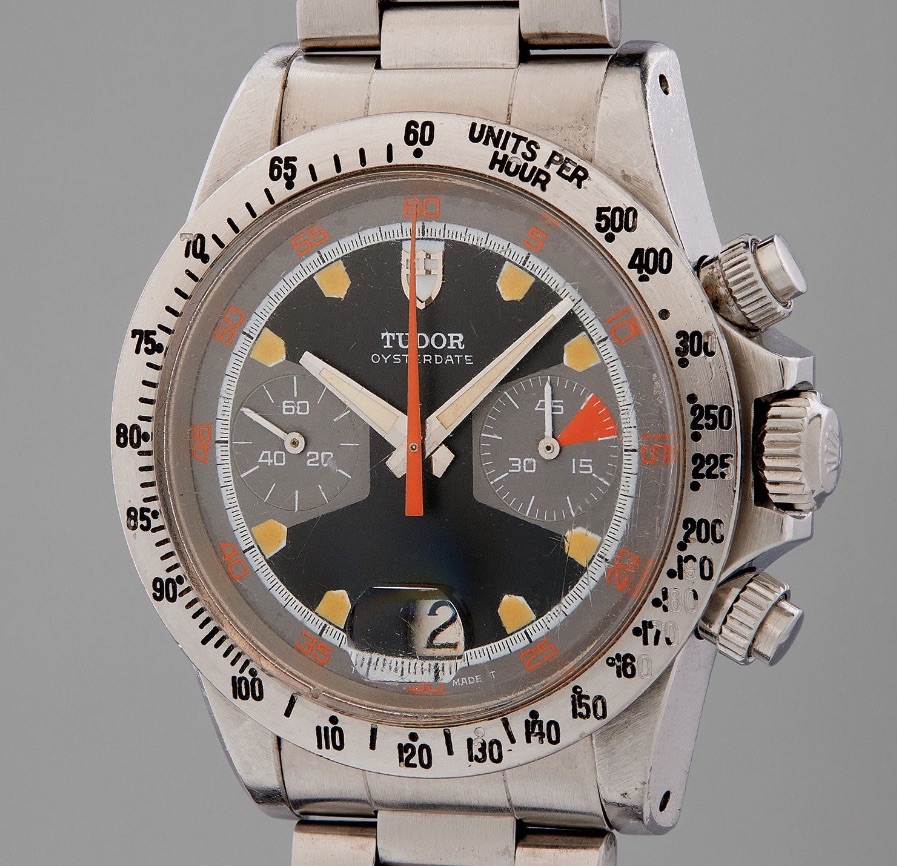 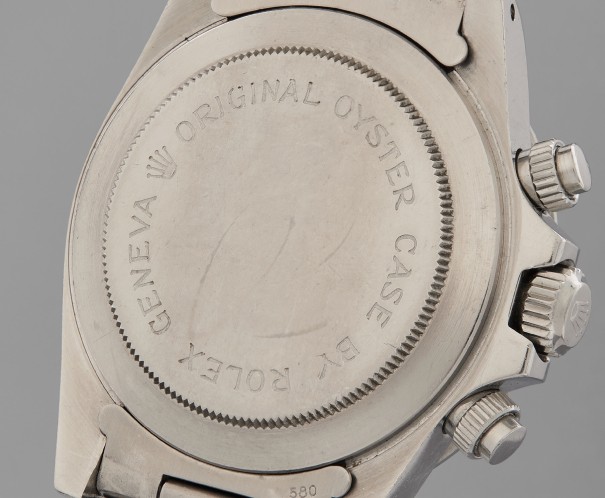 The classic caseback of the 7032 chrono

Nice bevels on the case

Seen by many Tudor Collectors as the ultimate Tudor MilSub, the blue snowflakes issued to Marine Nationale personnel is a both a very cool and sought after watch. This is a watch that was issued in 1975 and is unusual in that it was only in this year that the full-form version of the year was used on these watches. All other MNs have the last two digits, eg 74 or 76, engraved following the MN. The development of the snowflake hands is actually attributed to Tudor’s relationship with the French national navy and this MN1975 features the icon hands which look fantastic against the faded blue bezel. The watch doesn’t come with ledger extracts but appears to be from the correct serial range for this year of issue. 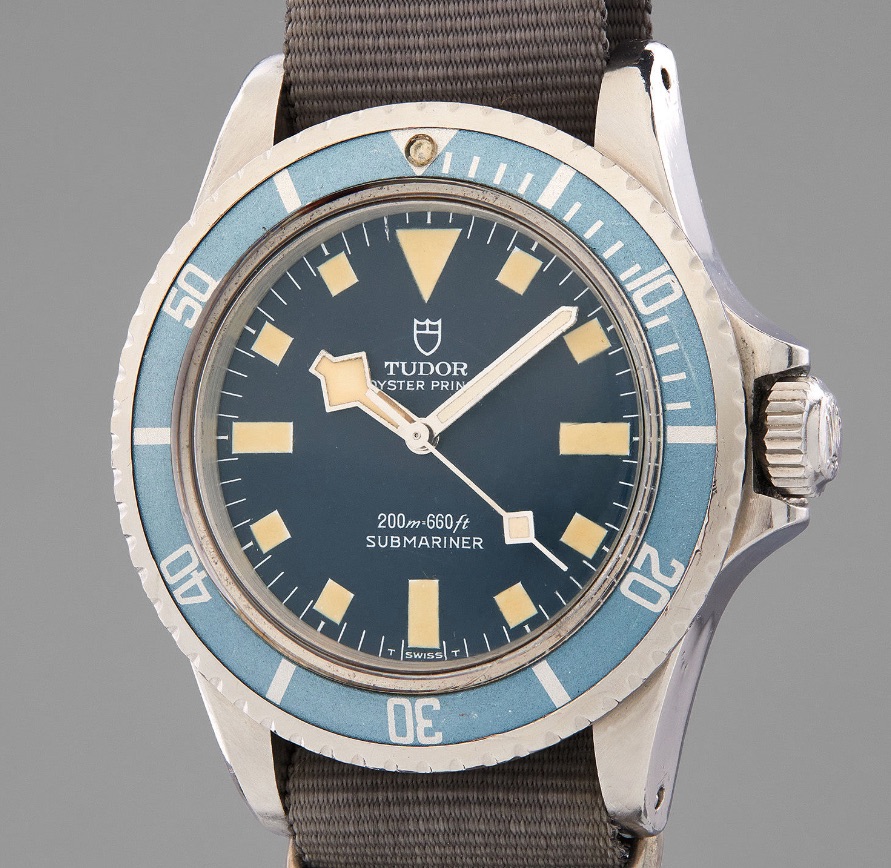 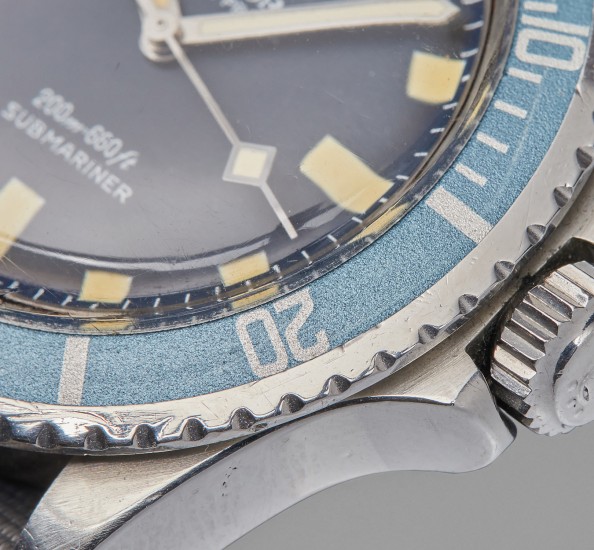 Faded insert and yellow patina on the hour plots 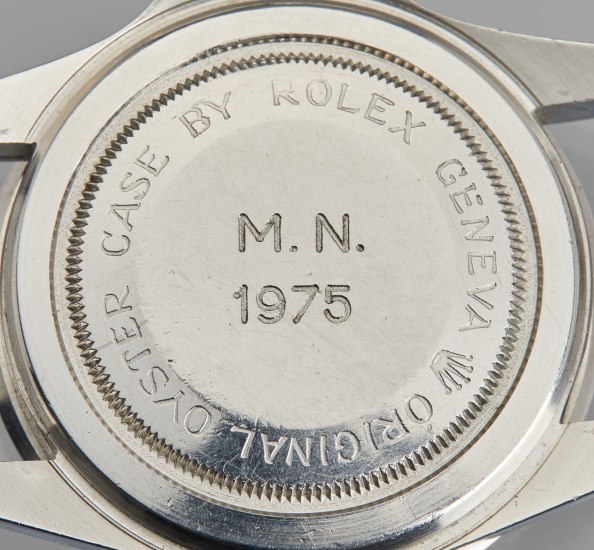 We are now used to seeing interesting Tudors at Antiquorum and the November sale in Hong Kong has a couple that I thought would be interesting to cover here. The ‘headline’ Tudor is a Big Crown Submariner ref 7924 with tropical dial. This watch dates to 1958 and is the watch that inspired the recent Tudor Black Bay 58; the 58 coming from the date that the original Big Crown was launched. This is the watch that largely started the Tudor MilSub saga with examples issued to the French, US and Argentinian navies and its a highly sought after reference by all collectors. 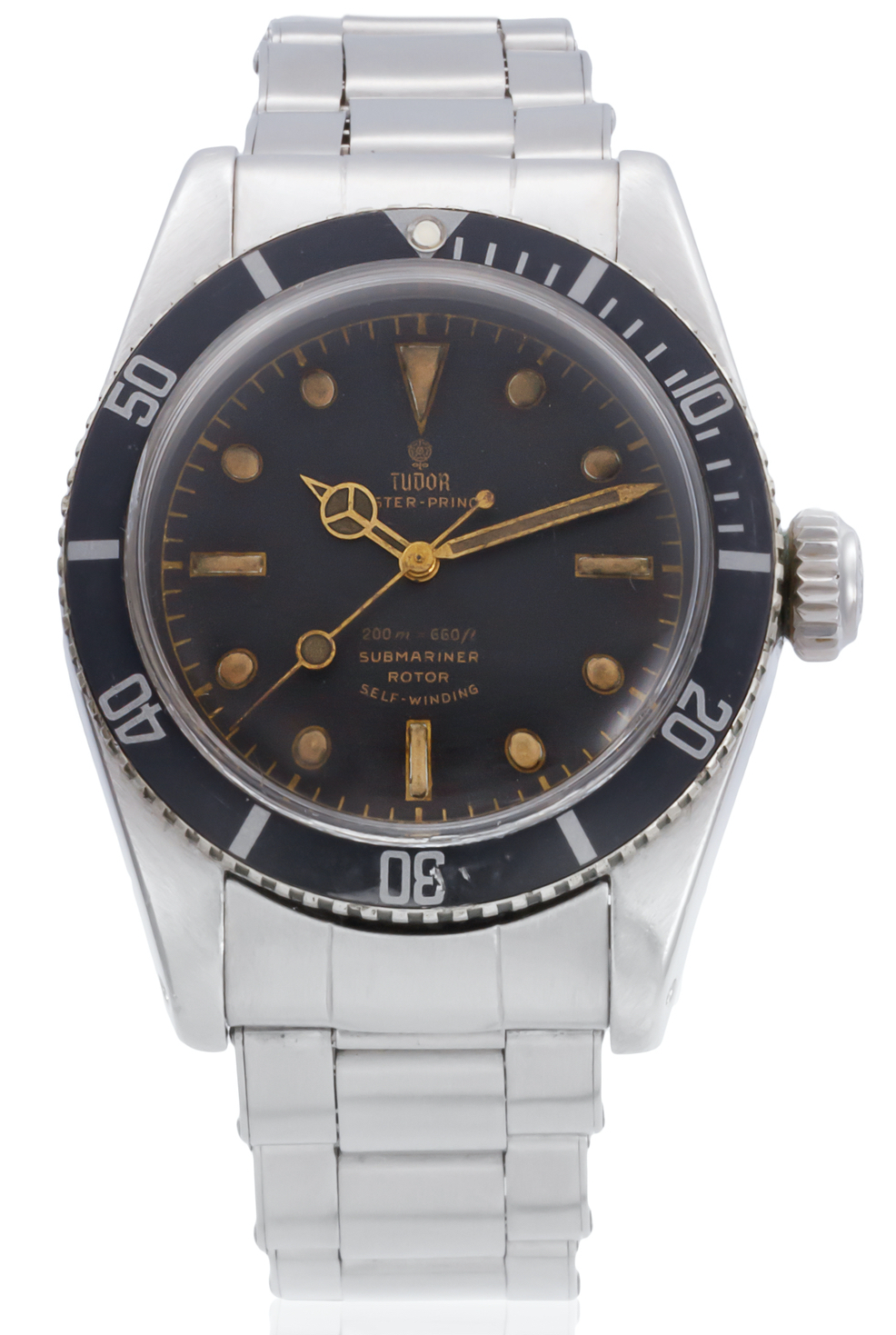 I’ve included this because I have been enjoying researching the vintage Tudors in integrated bracelets. This year Tudor unveiled the Royal collection, which pick up where these watches left off. I like the burgundy dial and its also a birth year watch for me – 1975! Its a small ladies watch at 26mm but you can clearly see the inspiration for the new Royal collection’s bezel and the integrated bracelet is a very current look generally. If its sells a the estimate its a great buy for Christmas!

A Tudor Princess on integrated bracelet