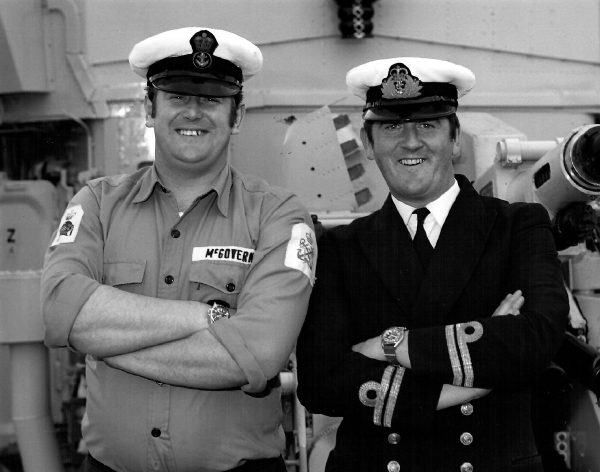 A British Navy Diver and His US Navy Issued Tudor Sub

When a British Navy Diver, stationed in Florida, had a problem with his dive watch, a US Navy issued Tudor Submariner came to the rescue...

Today I am delighted to share with you a very interesting story about a Tudor Submariner Date, reference 7021, that was given to a ‘Brit Abroad’ – more specifically, a Royal Navy Clearance Diver who was taking part in a collaborative project between the British Royal Navy and the United States Navy. During the mid-1970s a professional diving watch was still an important part of a diver’s issued equipment. During that time the UK MOD issued Rolex Submariners and Omega SM300 watches. McGovern was issued the former and he wore it on a daily basis.

A collector friend of mine, JT, got to know McGovern and has researched his career in the military. “Bill McGovern joined the Royal Navy in 1968 and immediately underwent training to become a diver. He was the first to be qualified directly as a diver at HMS Vernon, Portsmouth. His first posting was to the Fleet Clearance Diving Team (FCDT) where he worked both in the UK and abroad on various diving & mine clearance operations. Bill served onboard the minesweepers HMS Wilton, HMS Brinton and HMS Gavinton as well as the aircraft carrier HMS Bulwark.”

The FCDT were sent to Egypt, where their work hit the local press. “The Suez Canal kept the Fleet Clearance Diving Team busy as they worked to clear ordnance and other military debris following the Arab-Israeli 6 Day War. Bill was photographed in the news, loading HMS Abdiel. The final tally of items removed included 209 tons of TNT bombs of various sizes, about 800 anti-tank and anti-personnel mines, 6,000 rounds of ammunition and 70 various missiles.” 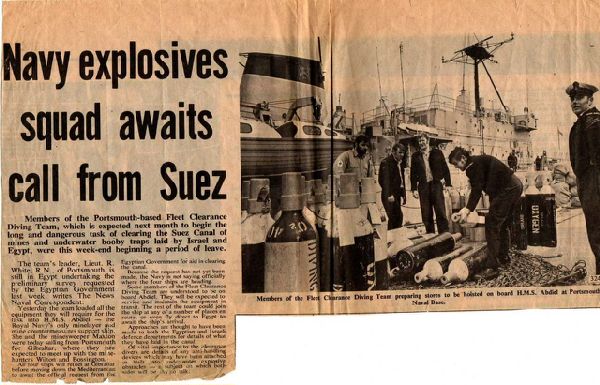 An news article about the team featuring an image of McGovern loading HMS Abdiel.

The British US Connection

With five years of experience under his belt, Bill McGovern was transferred to the Royal Navy Experimental Dive Unit. At that time he undertook work with the Royal Navy Physiological Laboratory on the development of new decompression tables. At the same time, the US Navy were working on on a similar programme and so the two nations decided to work on a collaborative project. “In 1975 a team of 14 British divers, Bill being one of them, was sent to the USA to work with the US Navy Experimental Dive Unit in Panama City, Florida. They were to carry out sea trials of the new tables using the Mark 1 Deep Dive System, installed on the diving barge YDT-16.  A team of US Navy divers had already set an open sea World Record depth of 1148ft from the Mark 1 Deep Dive System. A member of his US diving team was Bo Burwell” 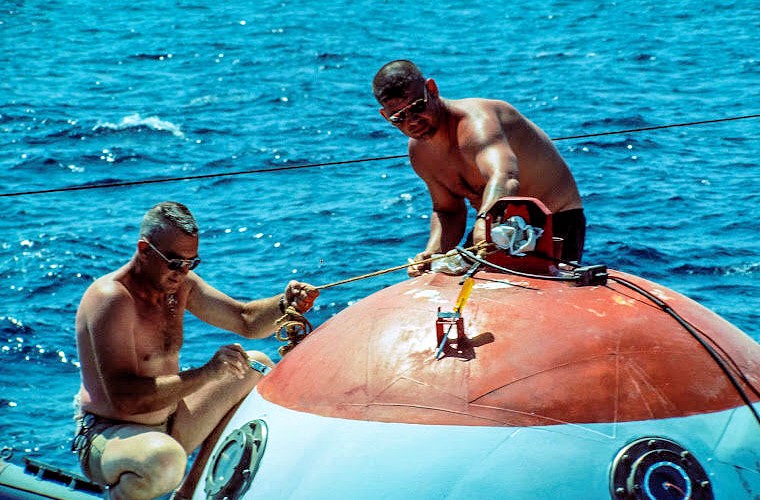 Bo Burwell on top of the Mark 1 Deep Dive System

Jt continues, “It was on arrival in the Gulf of Mexico that Bill noticed his issued Rolex Submariner was steamed up.
He informed Command and Bo Burwell who was there removed his watch from his wrist and gave it to Bill. That watch was a Tudor Submariner that Burwell had been issued by the US Navy stores.”

Ss part of his research, JT contacted Bo Burwell in the hope of finding out more to corroborate this story.

The following letter is from Bo Burwell to JT:

I remember Bill McGovern and his recollections are correct.  The British Sat Team were with us during that summer period to do at-sea testing of the diving tables developed at their lab.   I was one of the Dive Watch Supervisors during the Dive Trials of their tables.  That was a most productive time between our countries, the Dive Teams, and individuals involved.

The Mark 1 DDS 1975 dive team included  British Clearance Diver  Victor Humphrey BEM – he also parachuted into the waters to clear the cruise ship QE2 from possible explosives, I cannot remember the year. Victor was the bell operator for the world record dive, myself and William Rhodes were the divers. Our dive was in May 1975 and lasted 17 days.

Rolex was the dive watch of choice In those days by Navy divers and others throughout the world. My Rolex exploded on the return to the surface from the 1800ft dive in 1979. 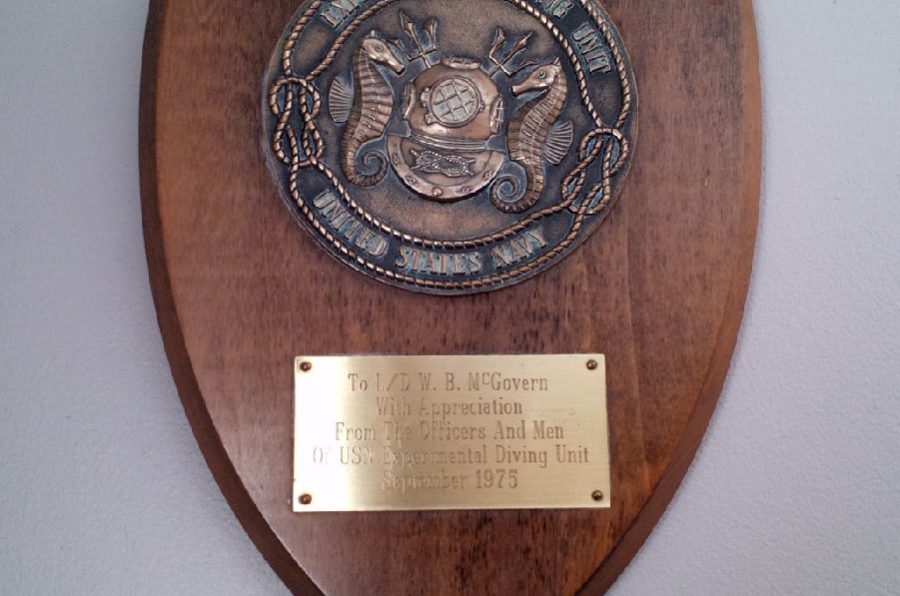 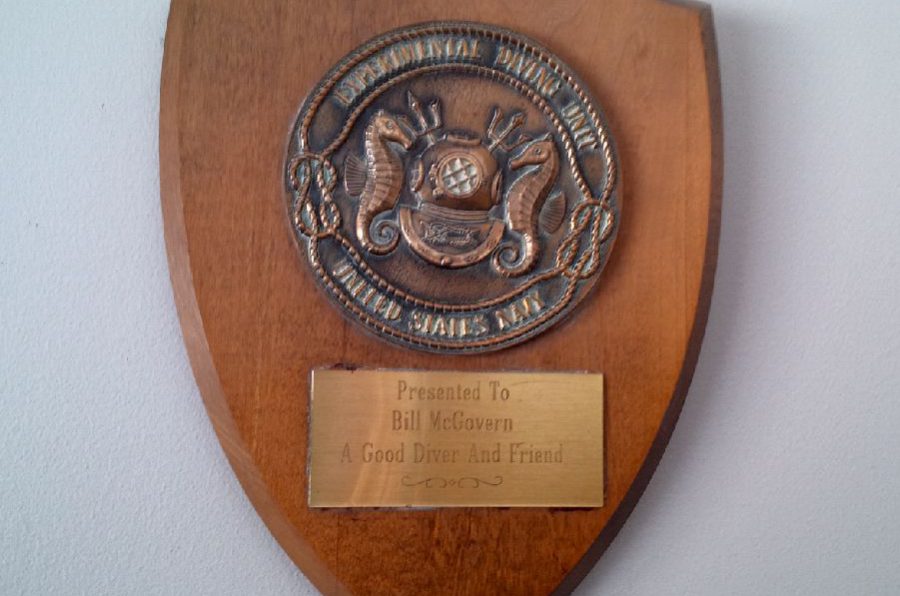 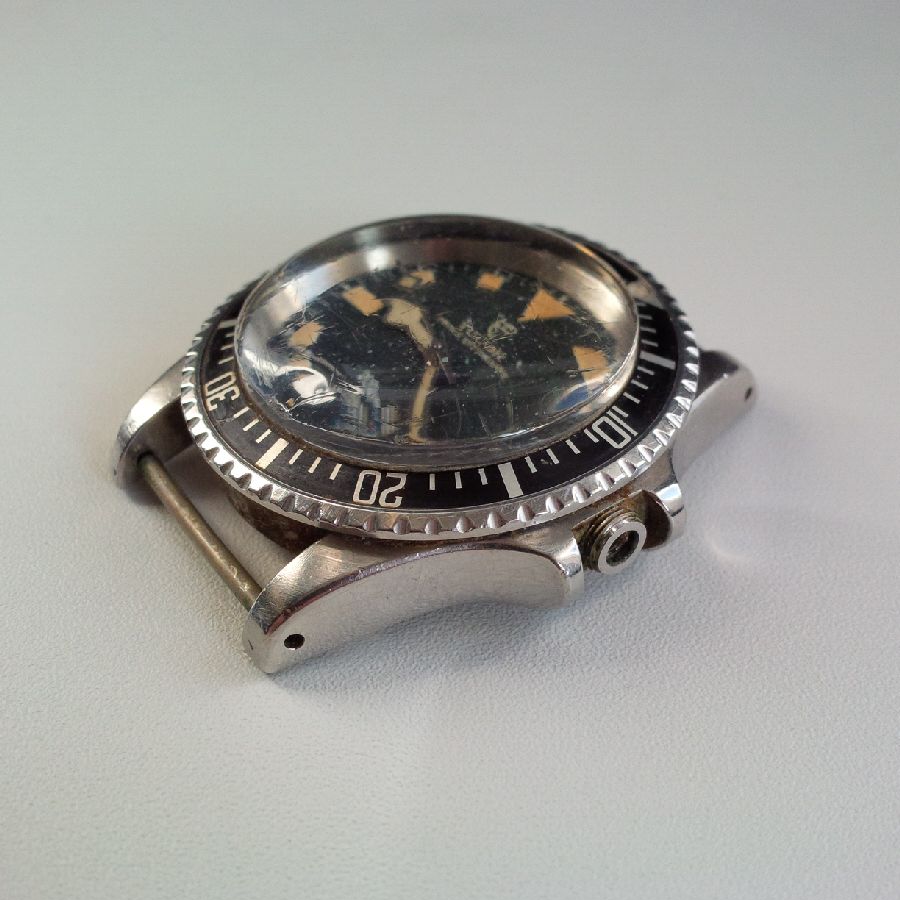 Bill McGovern's US Navy-issued Tudor Submariner that was given to him by Bo Burwell. Note the 60 min British MOD bezel insert!

Following the American success the Royal Navy team were able to set a new British open-sea record of 990ft.
Bill participated in the build up dives to 600ft. Throughout the rest of his time in the Navy he wore the Tudor Submariner that Bo Burwell had given him. He used it for dives in West Africa, North Africa, the West Indies, Fort Lauderdale, Miami, Venezuela, Brazil, France, Germany, Norway, Denmark, Malta, Holland, India and many more. A posting to HMS Faslane saw him working in hyperbaric medicine manning the decompression chamber as well as training submariners in escape practices, free diving to 100ft.

Following years of communication with Bill McGovern, JT was eventually able to purchase the Tudor. The watch was collected from Bill’s home where JT spent a few hours talking about McGovern’s service and adventures. “Upon getting the watch it was missing the crown, lost whilst chopping logs and the bezel was bent and detached. The watch was fitted with a T-39 tropic with a hefty dent in it and of course it had the 60 minute UK MilSub spec insert installed. I had the watch overhauled and I am very proud to own it still and enjoy it!”

And what’s not to love about this watch? Aside from the fascinating history and the incredible military missions on which it accompanied Bill McGovern, its a very cool and desirable early 7021 Submariner Date. The 7021 was the first time that Tudor included the date complication on a Submariner. Originally they were fitted with roulette dates wheels, where the even numbers are red and the odd numbers black. The McGovern watch has this original date wheel fitted still. One aspect of this watch that I really love is the dial – like a lake of black meeting blue. These early dials aged in unique ways; each watch now having its own look.

I would like to thank JT for all his help, insight and research for this article – and for sharing this amazing watch’s story! 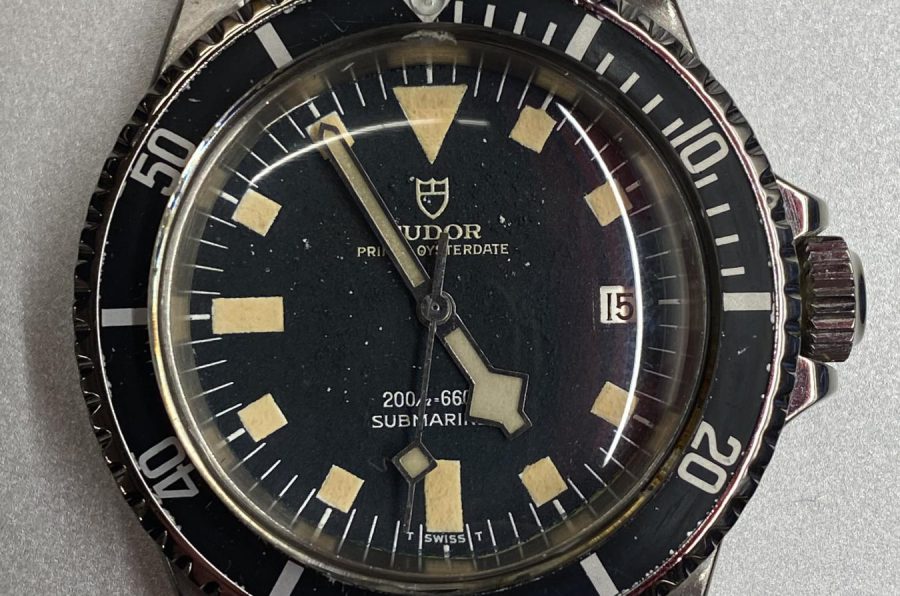 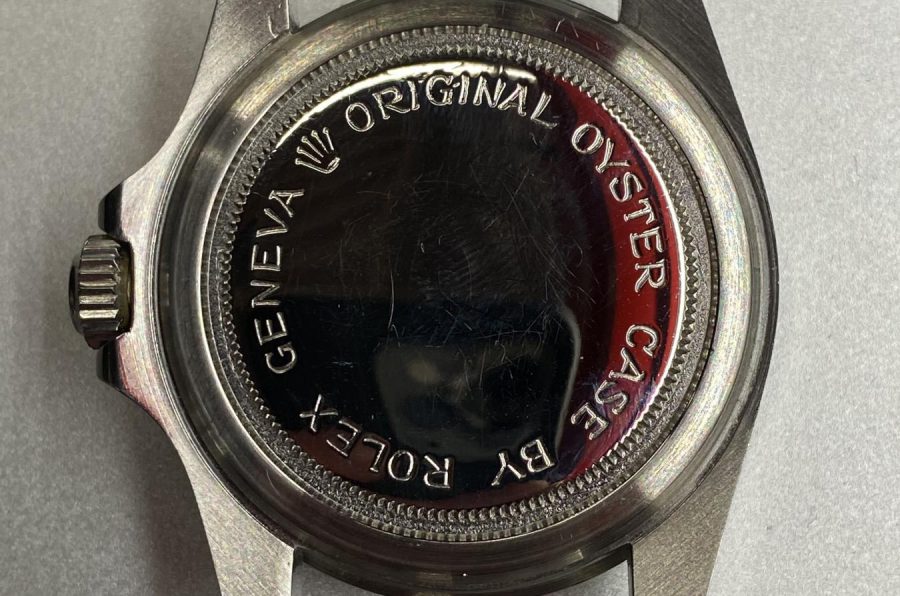 The caseback has a service mark from April 1975, just before the DDS dives 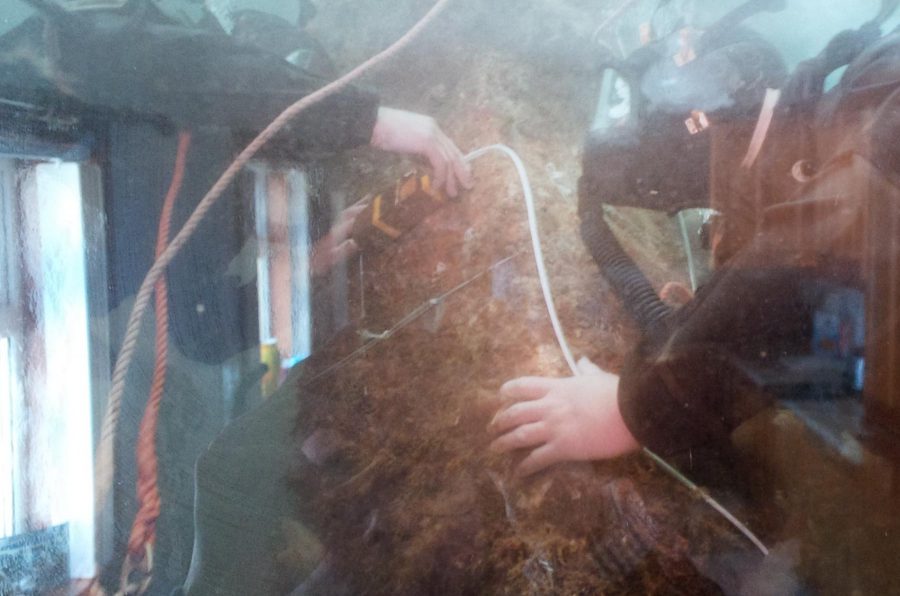 McGovern on a training exercise 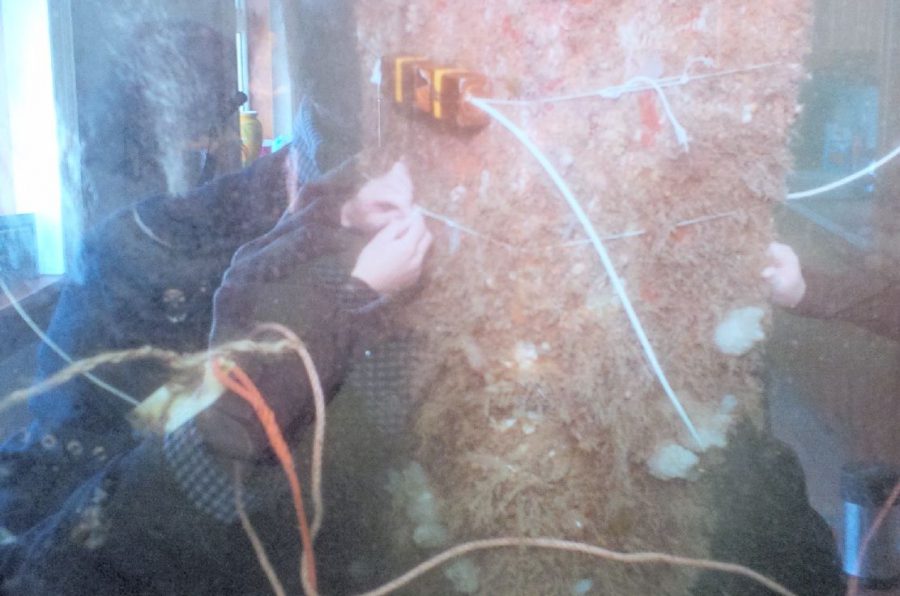 On a training dive setting explosives 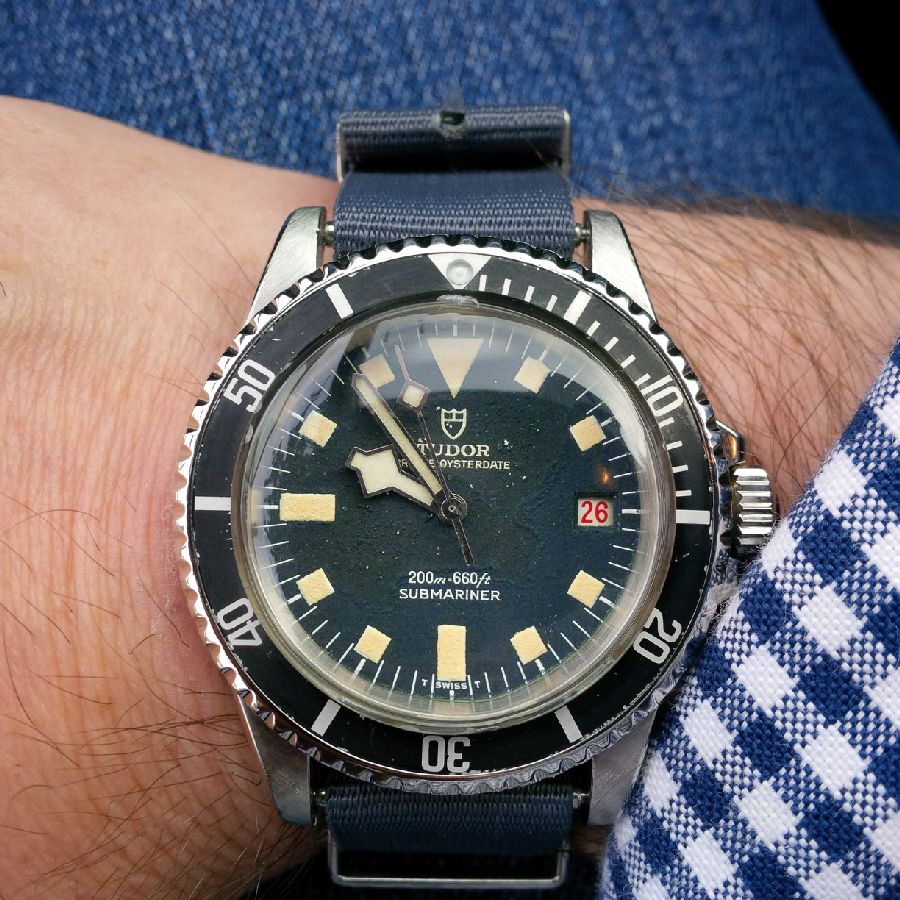 The watch as it is today. Note the roulette date wheel and cool 18mm nato strap - the same way Bill McGovern always wore the watch