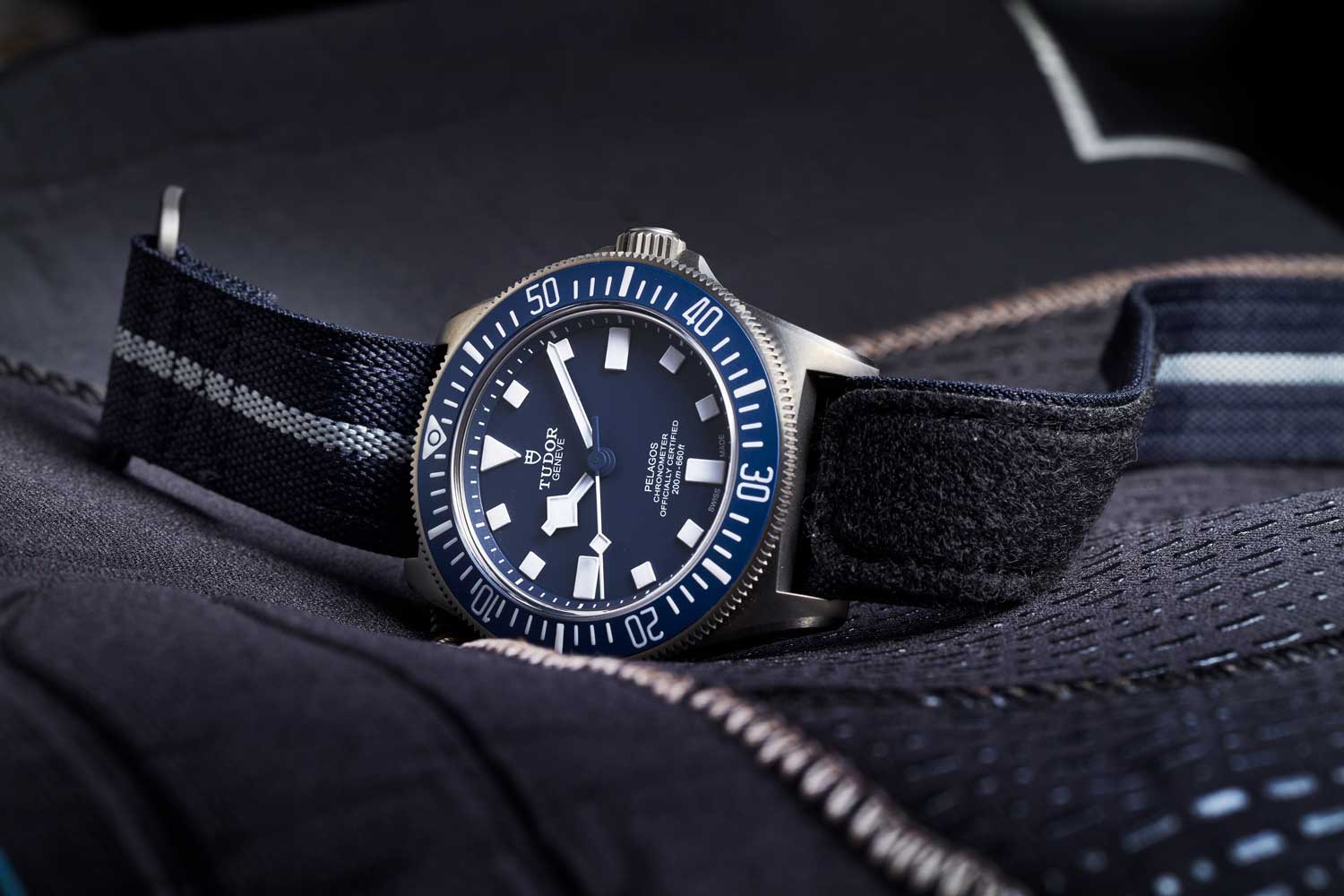 Since its launch, the Pelagos has been the professional dive watch offering from Tudor. Sure, the Black Bay can go to depths that will be more than ample for ninety nine percent of divers, but the Pelagos goes deeper and is essentially a watch that can be used by commercial saturation divers thanks to its gas escape valve. Whilst the Black Bay has spawned an entire family of watches, the Pelagos has been the quiet sibling, making do with a blue makeover and a vintage-inspired ‘destro’ iteration known as Left Hand Drive. Now LHD is joined by FXD and now the ultimate tool watch of the Tudor dynasty has a new professional addition. 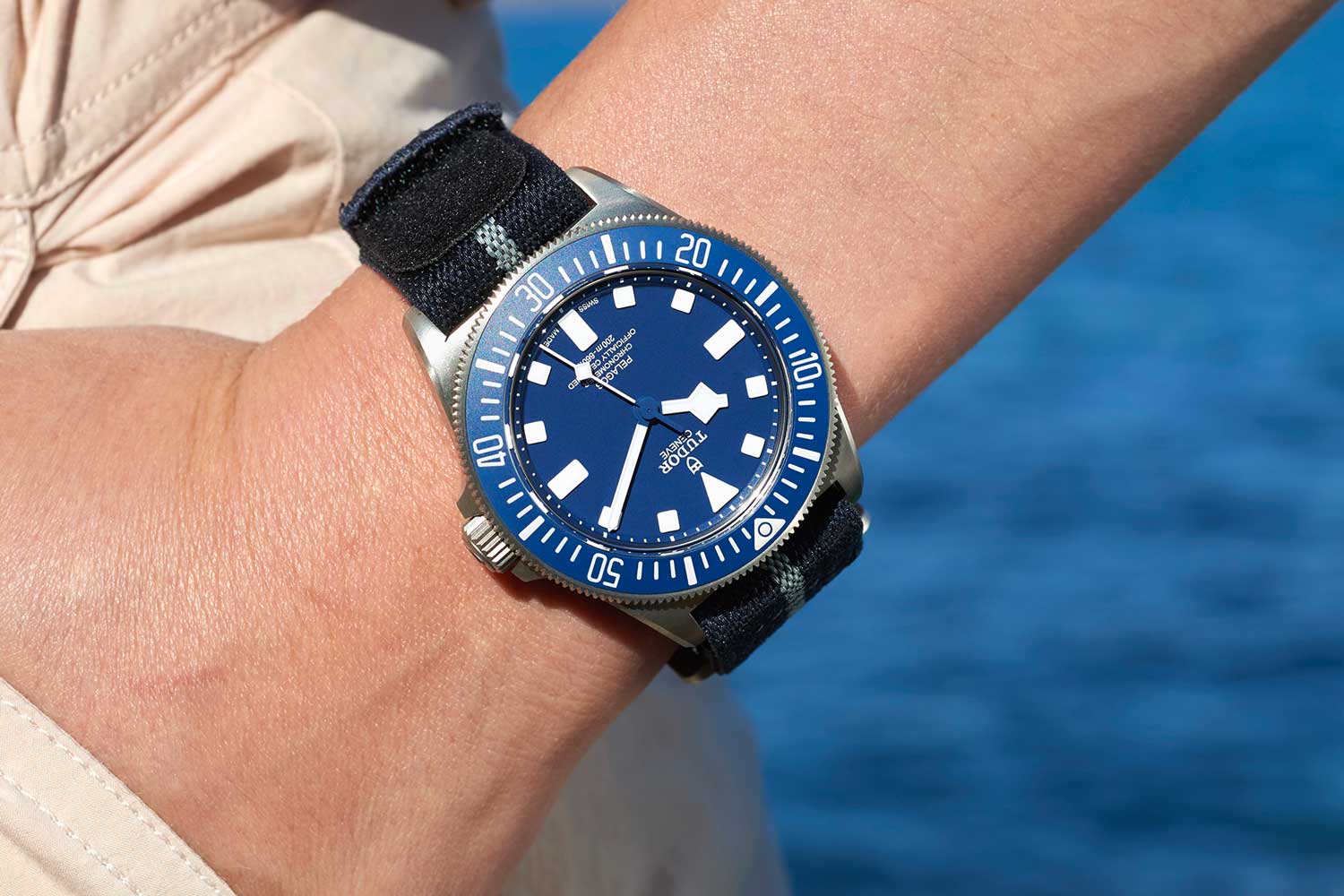 Tudor began working with the French navy in 1956. Groupe d’Étude et de Recherches Sous-Marines (G.E.R.S.) was a scientific wing of the French Navy that took delivery of a batch of Tudor Submariners to test them in the field. The two references that they first tested were the self-winding 7922 and an unusual manual wind reference 7923. Both were waterproof to 100 metres. Following rigorous testing by the MN, the watches were deemed “perfect” by the G.E.R.S.  Following these trails, Tudor became an official supplier to the French Navy in 1961 and continued officially supplying the navy with Submariner watches until the early to mid 1980s.

At the beginning of the 1970s, Tudor began delivering one of the most iconic dive watches ever made, the blue Snowflake Submariner. These watches, reference 9401, were no date Subs with vibrant blue dials and special hands. The Snowflake hands were developed in response to the Marine Nationale divers’ request for watches with more legible hands. A dive watch isn’t much use of you can’t see it clearly and this was an era that pre-dated wrist mounted dive computers and therefore a watch was a ‘tool pf the trade’ (hence the term tool watch). The no date blue Snowflake (worn on a grey nato for ultimate cool) is in many people’s eyes the de-facto Tudor MilSub (Military Submariner) and so it is that the Pelagos FXD is very much in the mould of this iconic timepiece. 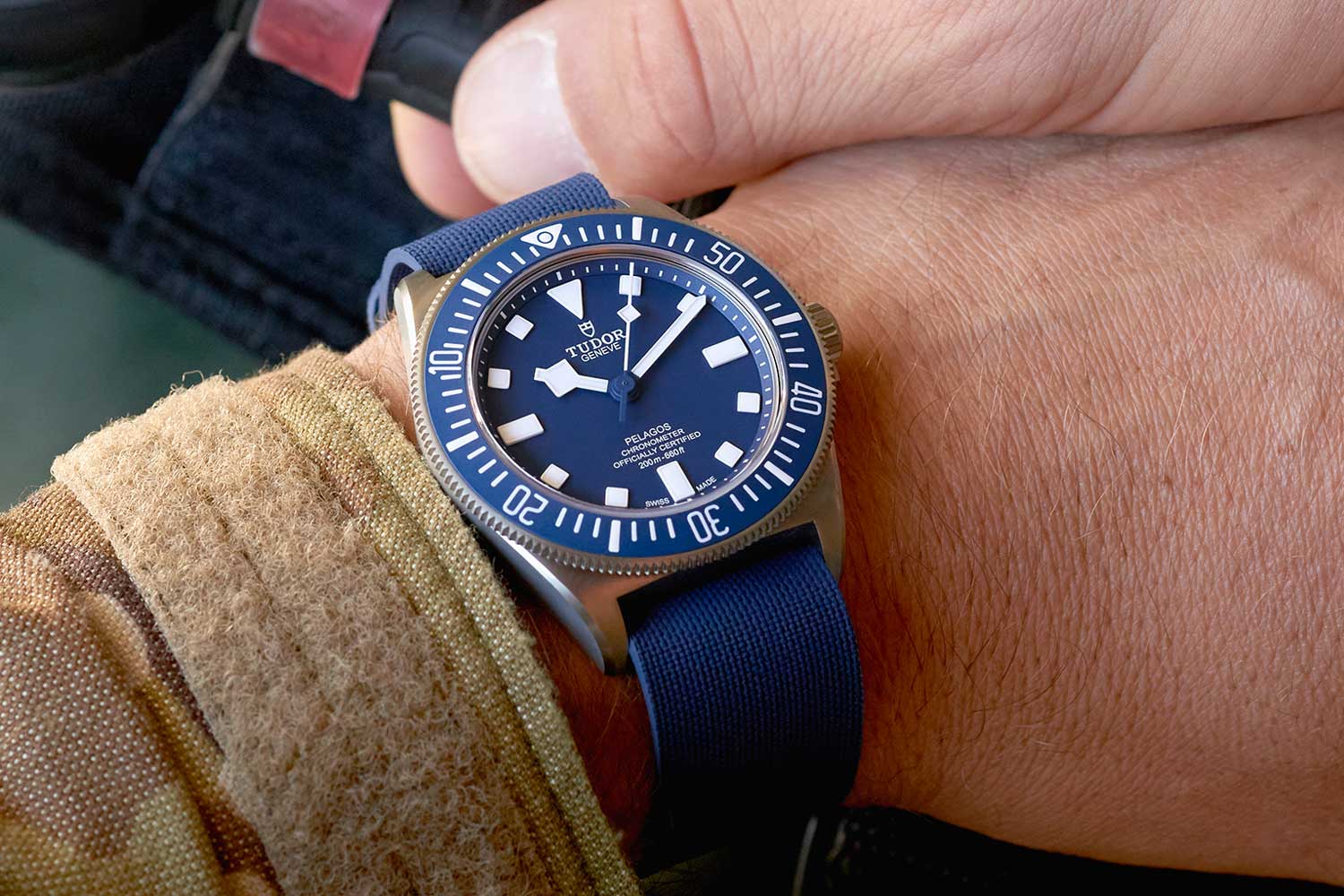 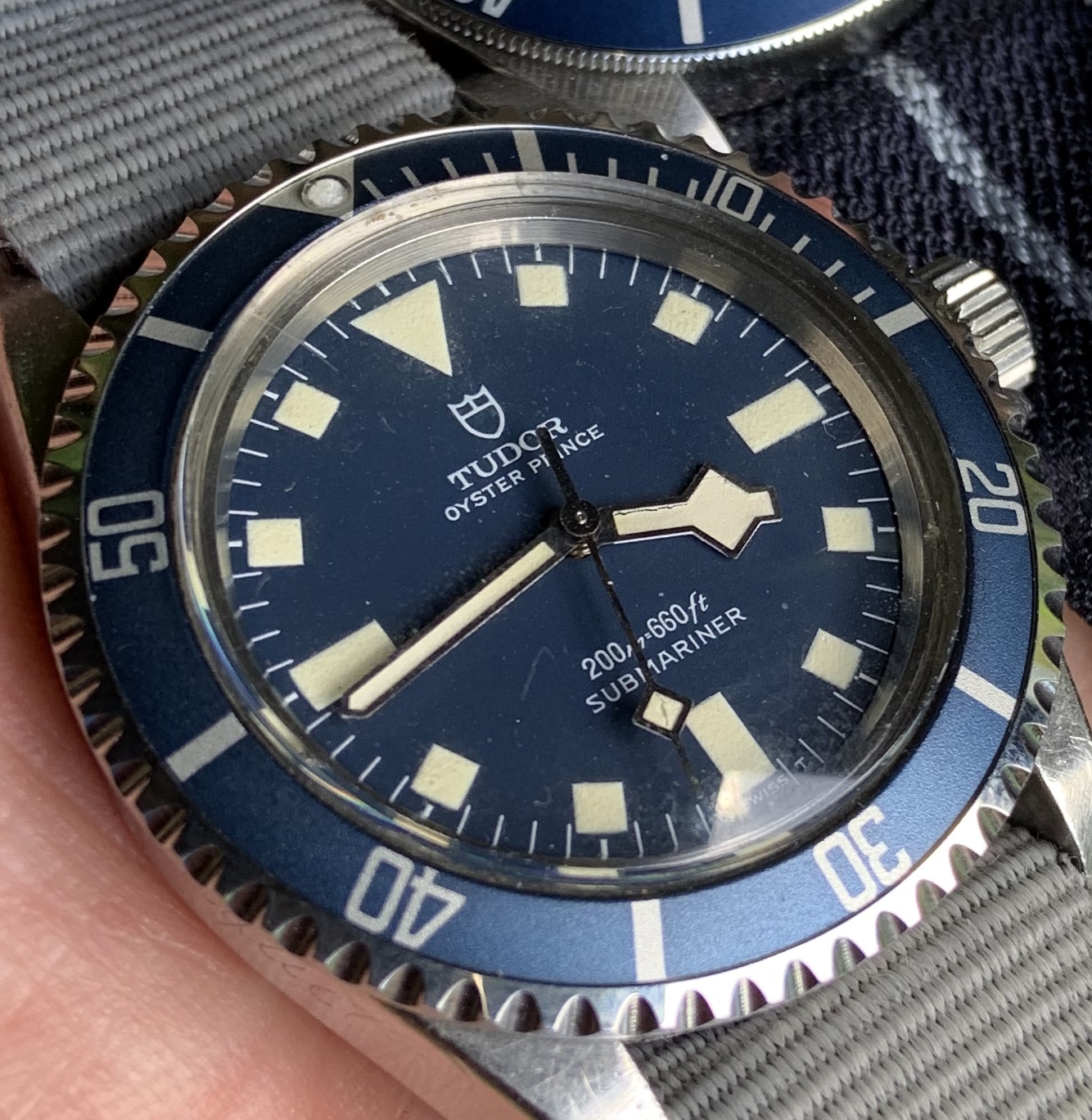 Pelagos FXD is not simply a PR or marketing project, to sell a military style watch. This is an actual, out-in-the-field watch that is being used professionally by finest marine commandos in the French navy. Not only that, but they designed the watch with Tudor to their very specific needs for combat swimming. The 42mm brushed titanium case has fixed strap bars cut from a solid block to ensure that there is little to no chance of the watch being lost whilst on a mission. The case is slimmer than the Pelagos, due to the lack of gas escape valve, and the watch is waterproof to 200m, not 500m like the regular Pelagos and LHD. The blue dial and hands are fully legible thanks to the Super Luminova filled snowflake hands and the signature square hour markers. 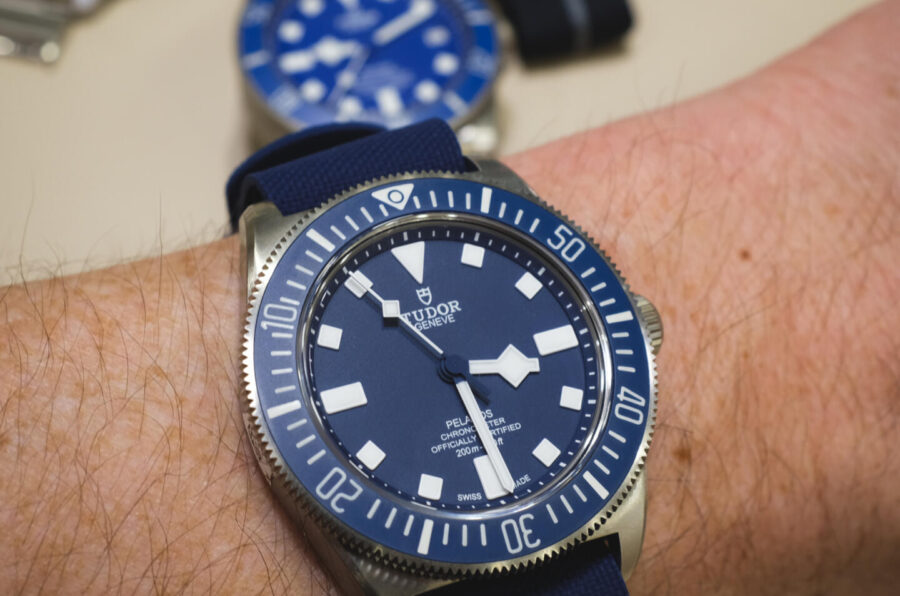 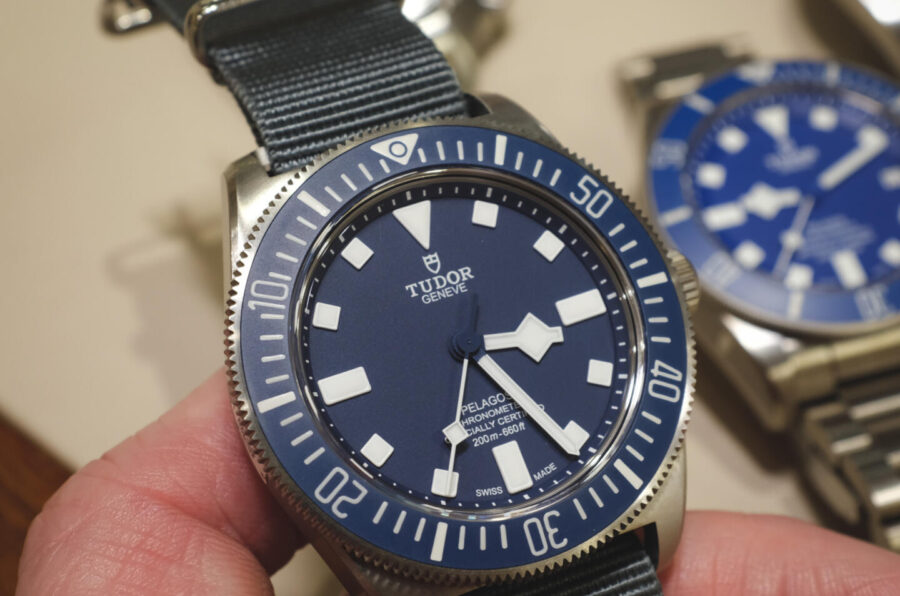 The bezel is something new for Pelagos. It is deliberately wider than the case to allow for easier operation by the commandos. It is also bi-directional which means that the watch doesn’t meet the criteria for the ISO 6425:2018 standard for dive watches, but then it isn’t meant to. It has been devised to be used by Commando Hubert divers for underwater navigation. For this purpose, the bezel has a retrograde reading on it, as it is a countdown bezel, not for measuring elapsed time. The underwater navigation takes place at a shallow depth (hence the 200m waterproofness of the FXD) with divers working in pairs, connected by a ‘lifeline’. One diver sets the course on a compass and the other diver times the swim exactly using his watch. The course is predetermined before the mission with a set number of swims in precise directions. The Important part is timing each leg of journey, which is why the bi-directional countdown is key to the watch’s function for this application. 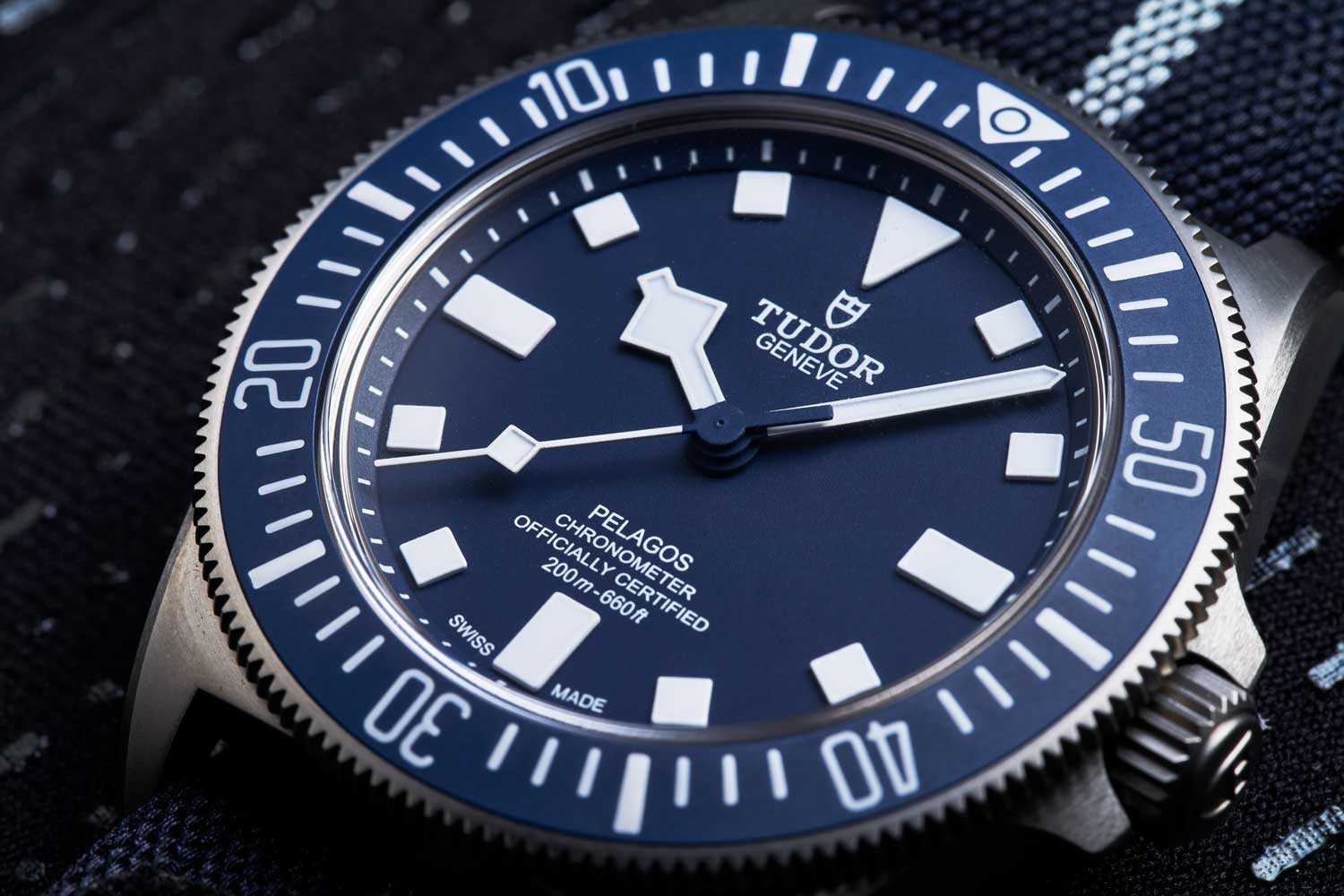 As one would expect now from Tudor, the Pelagos FXD houses a manufacture movement, calibre MT5602, and has a sapphire crystal and screw down winding crown. As we’ve seen in the past with the Black Bay P01, the Pelagos FXD has a vintage-style winding crown that resembles the trip-lock crowns that we know and love from the OG watches. And the coolest part for collectors? Each year the watches will feature an MN caseback engraving. One of the hallmarks of Tudor MN-issued watches from the 70s and 80s was the caseback engraving of the letters MN followed by a short form version of the year – 74 for 1974 and 76 for 1976 (geek fact – only in 1975 was the full year used ie MN 1975). So, watches produced in 2021 will be engraved MN21 and next year MN22 and so on.

I’m not going to pretend to play it cool about this watch; I make no secret about my passion for military Tudors. Therefore, it will come as no surprise to anybody that I love this watch and will be getting one onto my wrist as soon as humanly possible. Since the early years of my obsession with Tudor military watches, the creation of Tudorcollector and years of leading talks and seminars on the subject, this is the moment. This feels like my moment. And a sweet moment it is indeed!