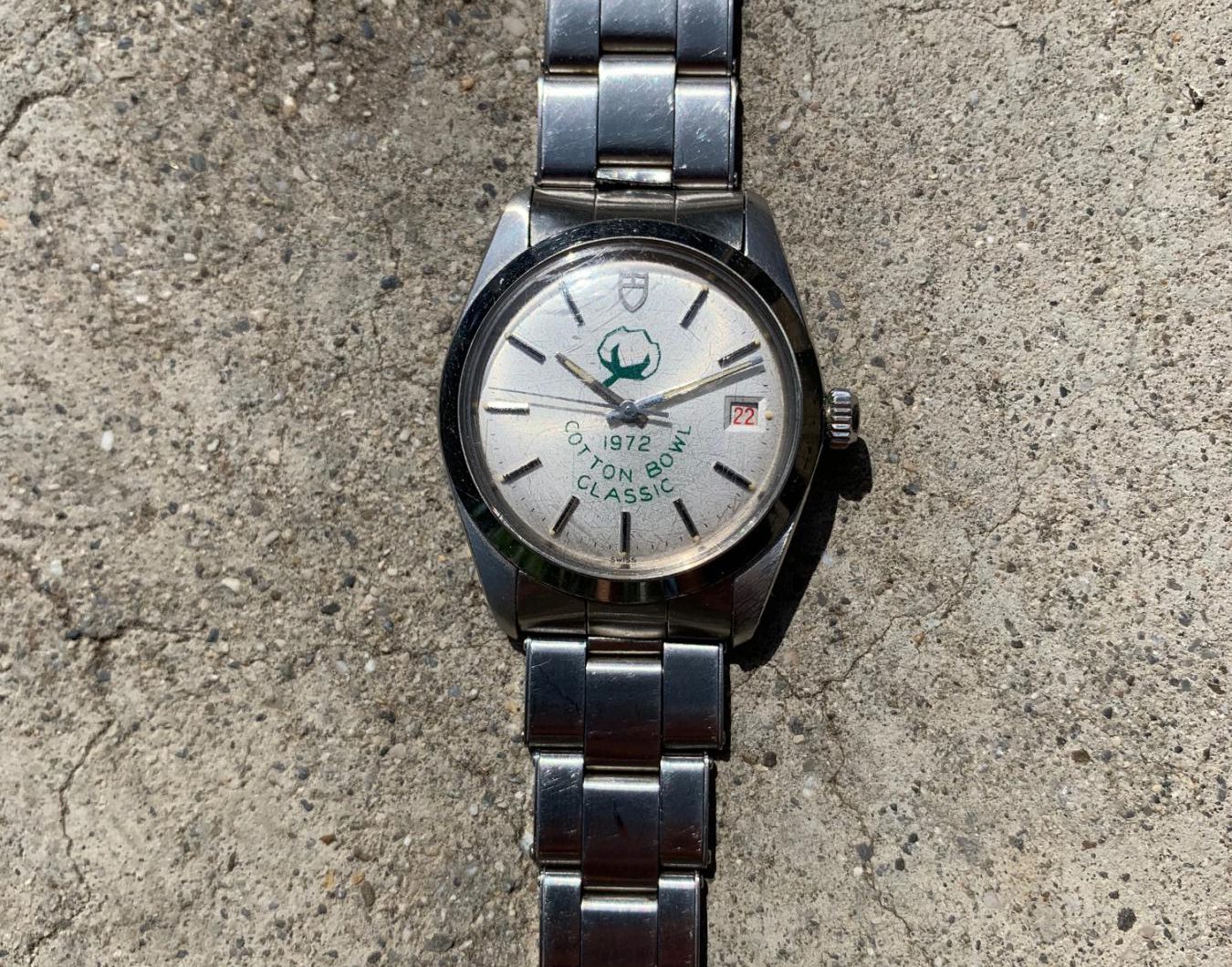 Thrill of The Chase: A 1972 Tudor Oysterdate Cotton Bowl

Not all special-order Tudors are for military use. In the 1970s a college American Football cup gifted competitors with special Tudor Oysterdate watches that had custom dials and personal caseback engravings. A Tudor Collector shares his story...

There are many reasons that people collect watches. Whether it is nostalgic, the aesthetics of a certain model and style or the watches’ connection to the military or sport – everybody is different and has their own rationale. Today we are talking to a private collector who enjoys combining his love of vintage Tudor watches with paraphernalia from his golden era of America, the 1970s and 80s. The tie in between Tudor and American Football is celebrated through the Cotton Bowl watches. If you’ve been interested in vintage Tudor for a while, you have most likely seen these interesting Tudor and Rolex Oyster watches that feature a green and white cotton flower and the text ‘COTTON BOWL’ and a date accompany the illustration of the cotton flower. But what exactly is the Cotton Bowl? 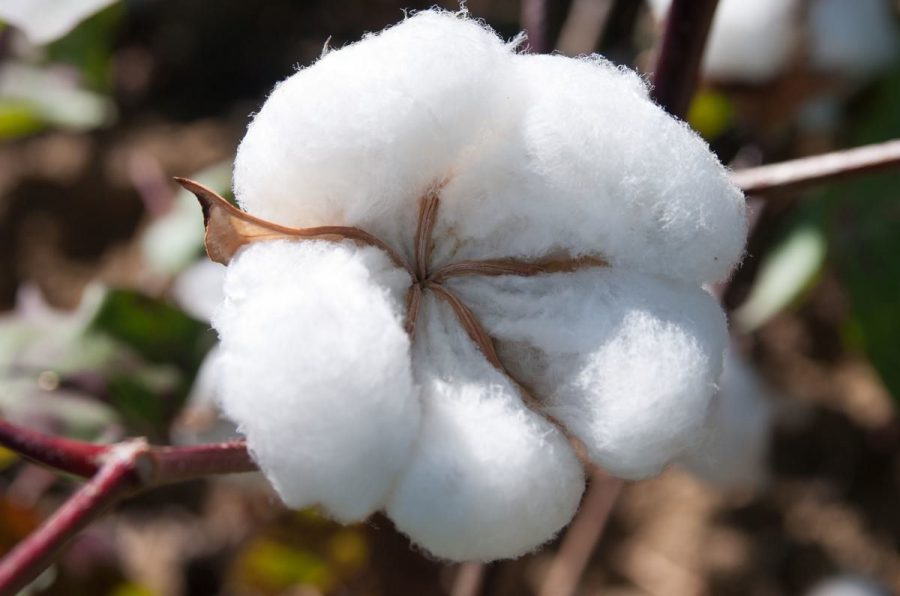 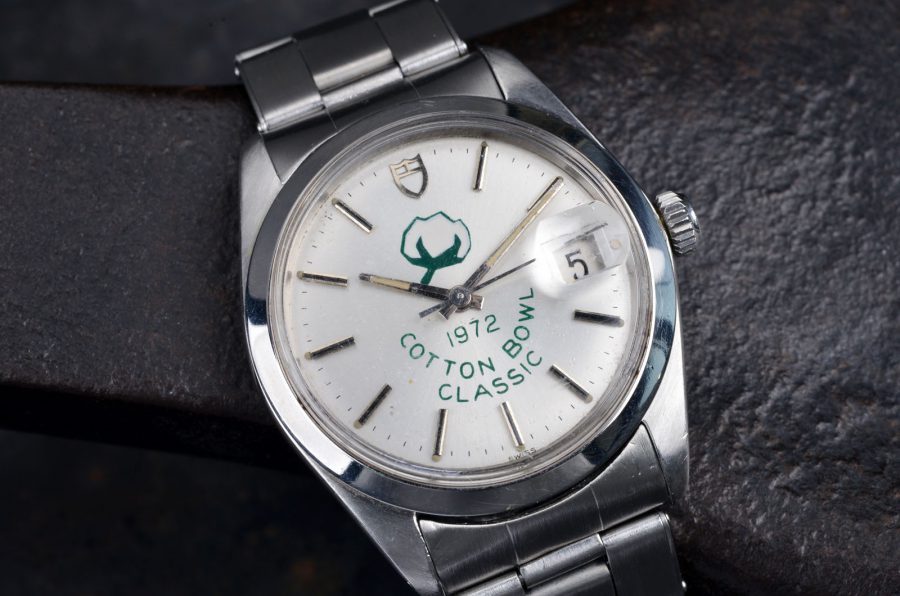 The Cotton Bowl is a stadium based in Dallas in the USA that, during the 1960s, was the home stadium of the Dallas Cowboys. The Cotton Bowl was built in 1930 at the site of the State Fair of Texas, one of the states key annual events since 1886. The stadium is used, still to this day for both college football games and rock concerts and was actually one of the venues for the FIFA World Cup in 1994. Its heritage is, however, in American Football and as well as the Dallas Cowboys, the stadium also was home to the Dallas Texans and the SMU Mustangs. One of the biggest events to take place there is the Cotton Bowl Classic.

The Classic was an annual American Football that ran between 1937 and 2009 and pitched two of the best performing college sides from across the US. Usually the winner of the Southwest Conference would play another major college team from another national league. Its key to note here, especially for non-American Football fans, that college games are major events. The average attendance at these games is 70,000; this is no minor event. The capacity is the same as a Manchester United game at Old Trafford! 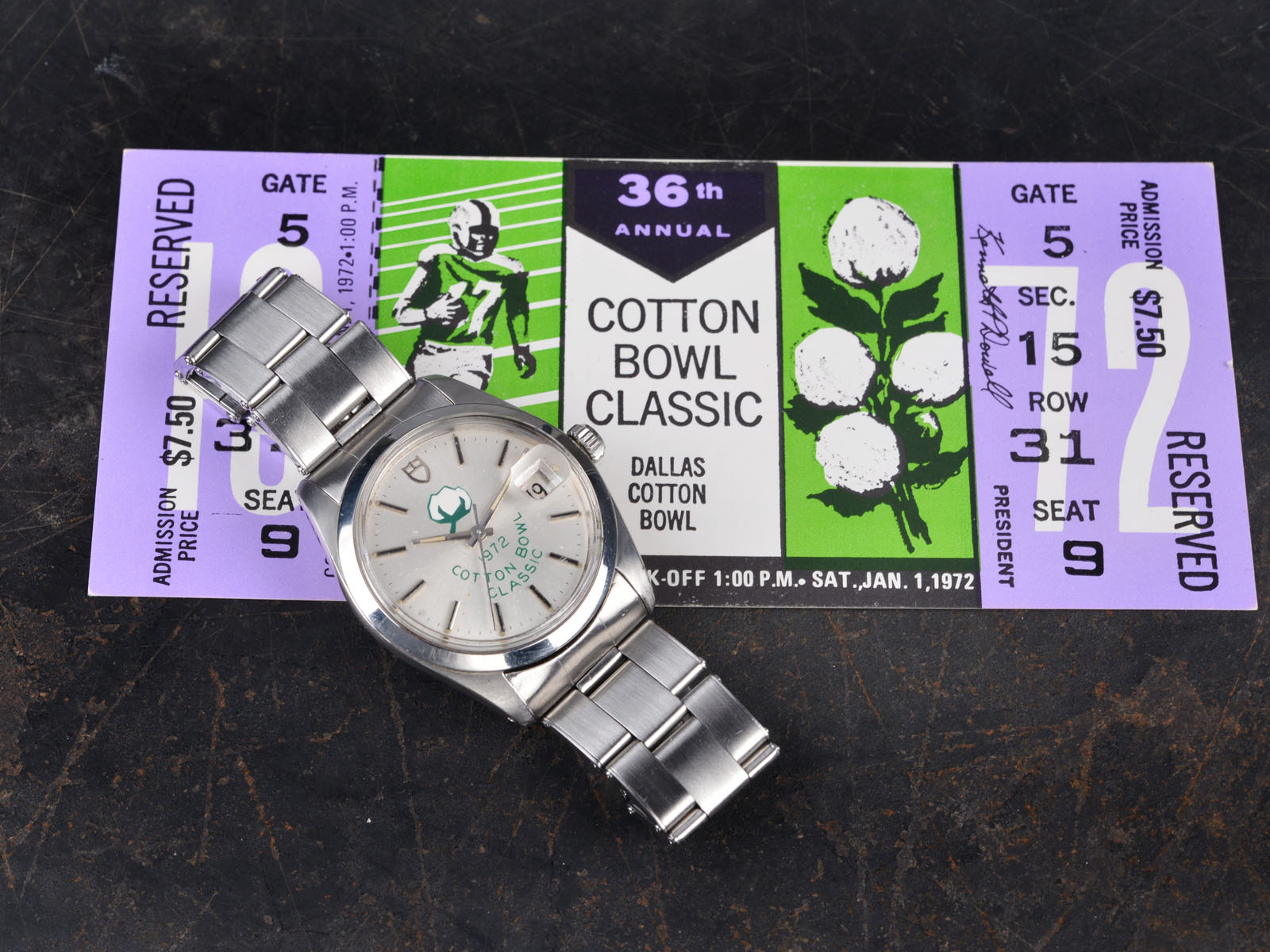 Our collector friend picks up the story. “1972 is a key year for Tudor fans, as it was this year that the Cotton Bowl Classic winners received Tudor watches after five years of the winners being awarded Rolex pieces. In 1972 the winning side were awarded Tudor Oysterdate Prince watches with the reference number 7996/0.”

I’ve written about these pieces before over on Bulang and Sons.  A lot of football ‘bowl’ games award rings to the winners, but the Cotton Bowl Classic was special in that the winners received a watch. The 1972 game was a big game, with 72,000 attendees, between the Penn State Nittany Lions and Texas Longhorns. Texas were winning 6-3 at half time, but in the second half Penn State scored 27 points and romped home to a convincing victory winning 30-6! Above are two of the Penn State team Tudors awarded after the game.

“One day I received a message from a good friend, Josh Bonifas the owner of Fourtane, in the US. He was at a watch show in New York and came across a 34mm Tudor Cotton Bowl. The reference of these watches is 7996/0, a  34mm self-winding Oyster watch that features a roulette date wheel (with red even numbers and the odd numbers in black) and each had a C&I rivet bracelet fitted. He instantly sent me a message knowing that this was my kind of watch. The watch was in great condition and the price was right so I told him to buy it for me. Now you need to know that all issued (or gifted in this case) CB watches have the name of the player engraved on the back. I have found a couple over the years from different years and most of the time was able to tie the name to a player of either team taking part in the bowl that year. This one was no different and bore the name J. W. Bach on its back.” 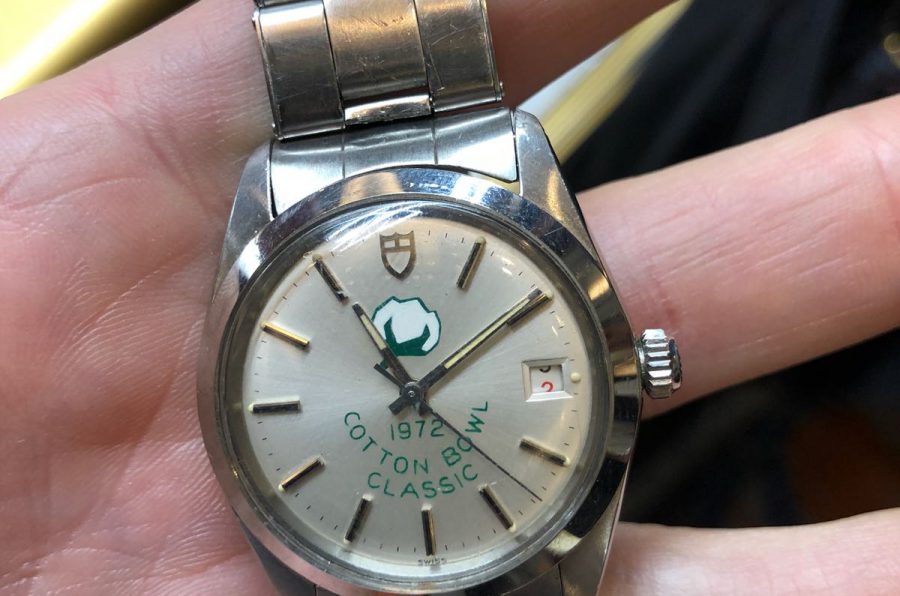 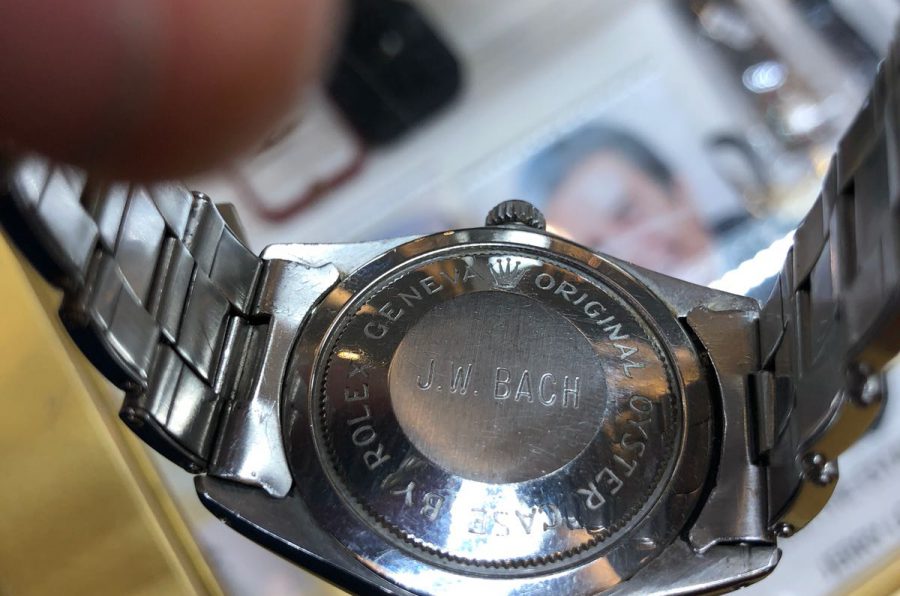 And so the research began in earnest. Admittedly, its often best to do your resaerch before agreeing to buy a watch! “After the message I took some time to research that name in the teams rosters from 1972 but couldn’t find anything. Neither at Texas University nor at Penn State which were the two teams playing. This was unpleasant and even though I knew from experience that some of these watches were engraved to family members of the players I didn’t like the idea so much so I sent a message to Josh telling him to call the whole thing off! What I got in return was “I bought it. Sorry!””

That sinking feeling was soon replaced with an optimism, born out of the fact that it was still a great watch in great condition. But the story took an interesting turn…

“At this point I was half disappointed but it was a nice watch and so I didn’t think of it much more. When I received the watch I didn’t do anything more about it for a while, I just enjoyed wearing it.  Eventually, one day I had some time on my hands and decided to carry out some further research and extend the scope of my reading to not only the teams but to the wider institutions at the time.”

Our collector’s research uncovered that a John William Bach, also known as Johnny Bach, had been the basketball coach of the Penn State Nittany Lions from 1968 to 1978, thus probably getting the commemorative watch as a member of the Penn State sports program.

In a total reverse of fortunes, the watch uncovered a very cool history.

“Now I knew who Bach was, I pushed on with my reading and I learned he that he played basketball professionally with the Boston Celtics and also was Head Coach of the Golden State Warriors at some point. And it got better as I found out he also was the “architect” of the aggressive defense of the original 3-peat Chicago Bulls and very close to Michael Jordan who he later on joined at the Wizards. I was the biggest fan of the Bulls during the original 3-peat era with Michael, Scottie and Horace and their legendary 93 finals against the Suns!”

“So in one little 34 mm watch I found without knowing it the combination of some major interests of mine: American popular culture with football, watches and Tudor more specifically as well as MJ’s Bulls. At a time when the latest Michael Jordan documentary, The Last Dance, is out and setting new audience records on Netflix, I though there was no better timing to tell the story of this watch!” 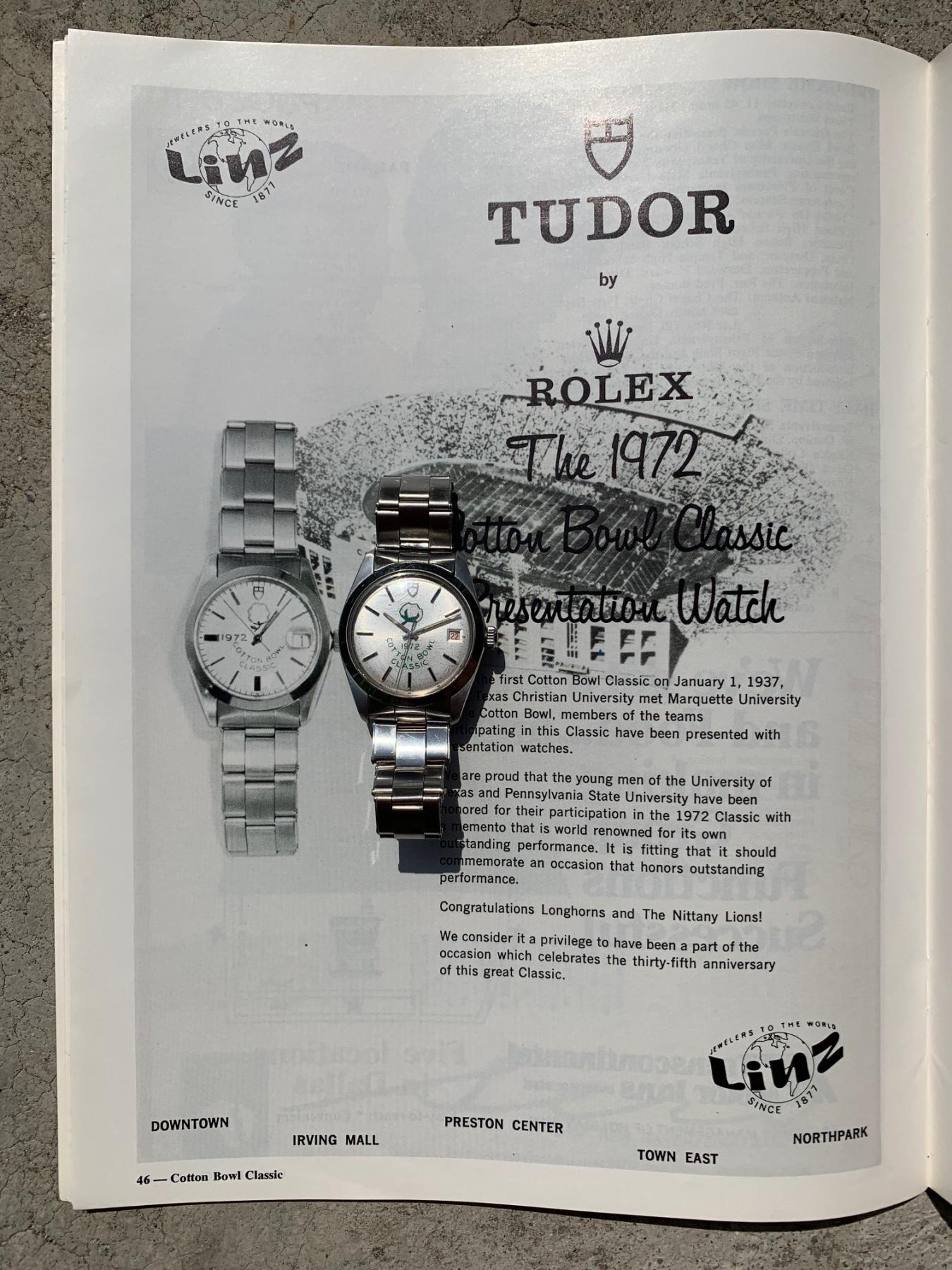 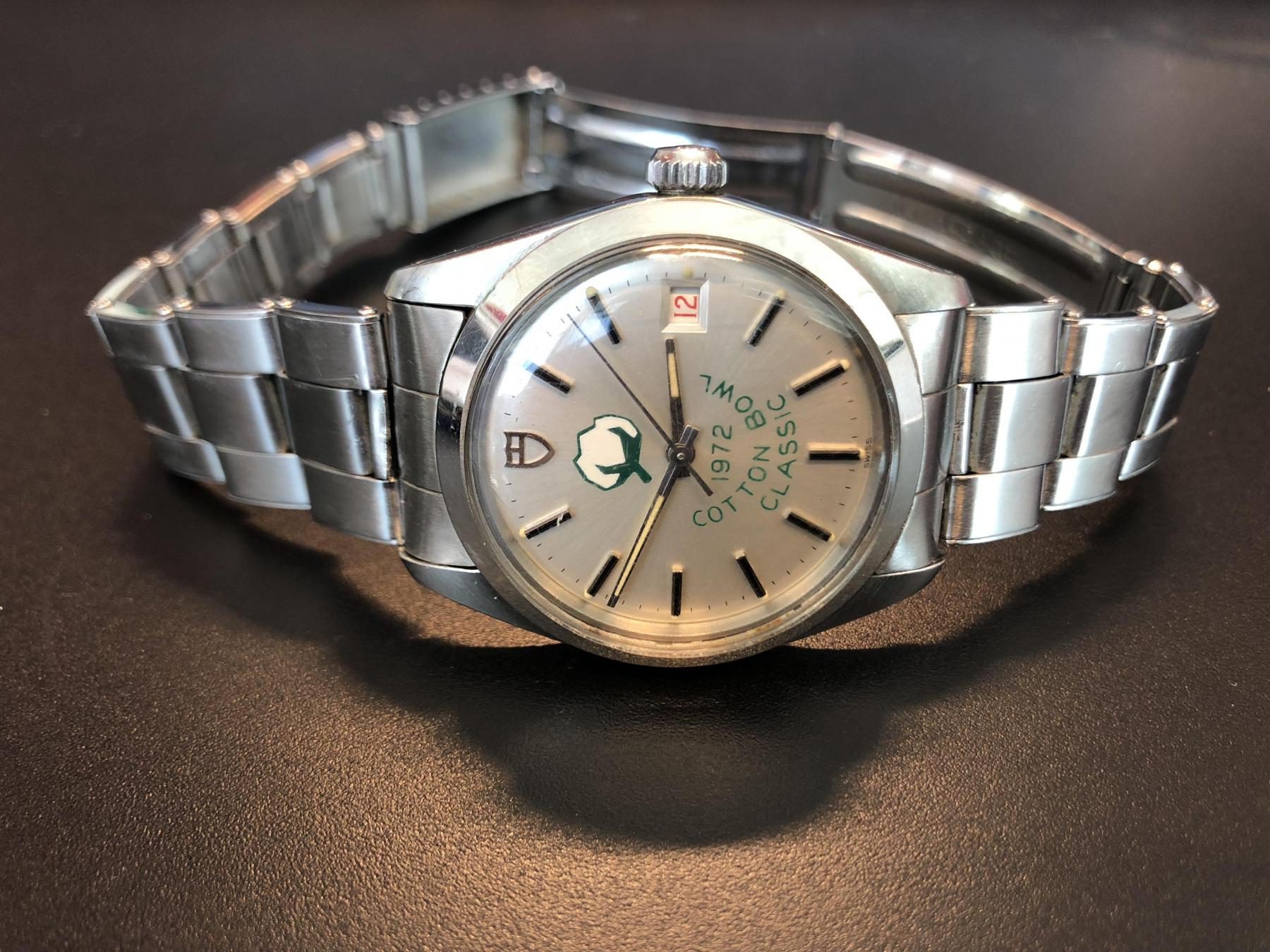 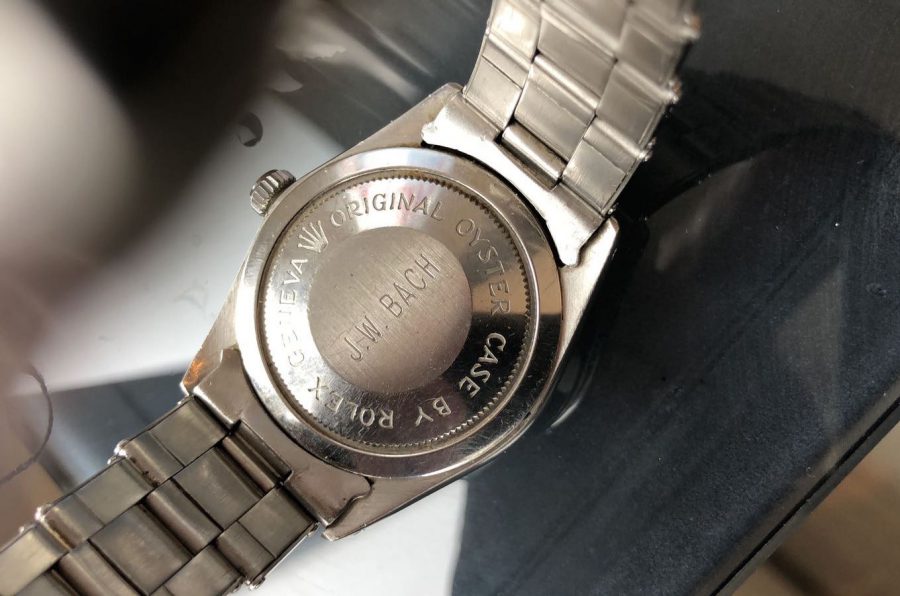 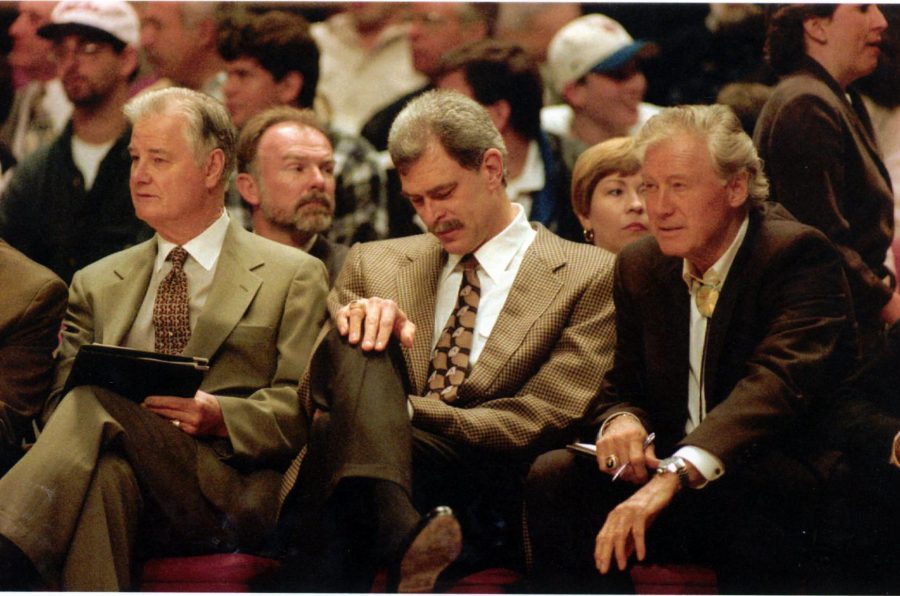 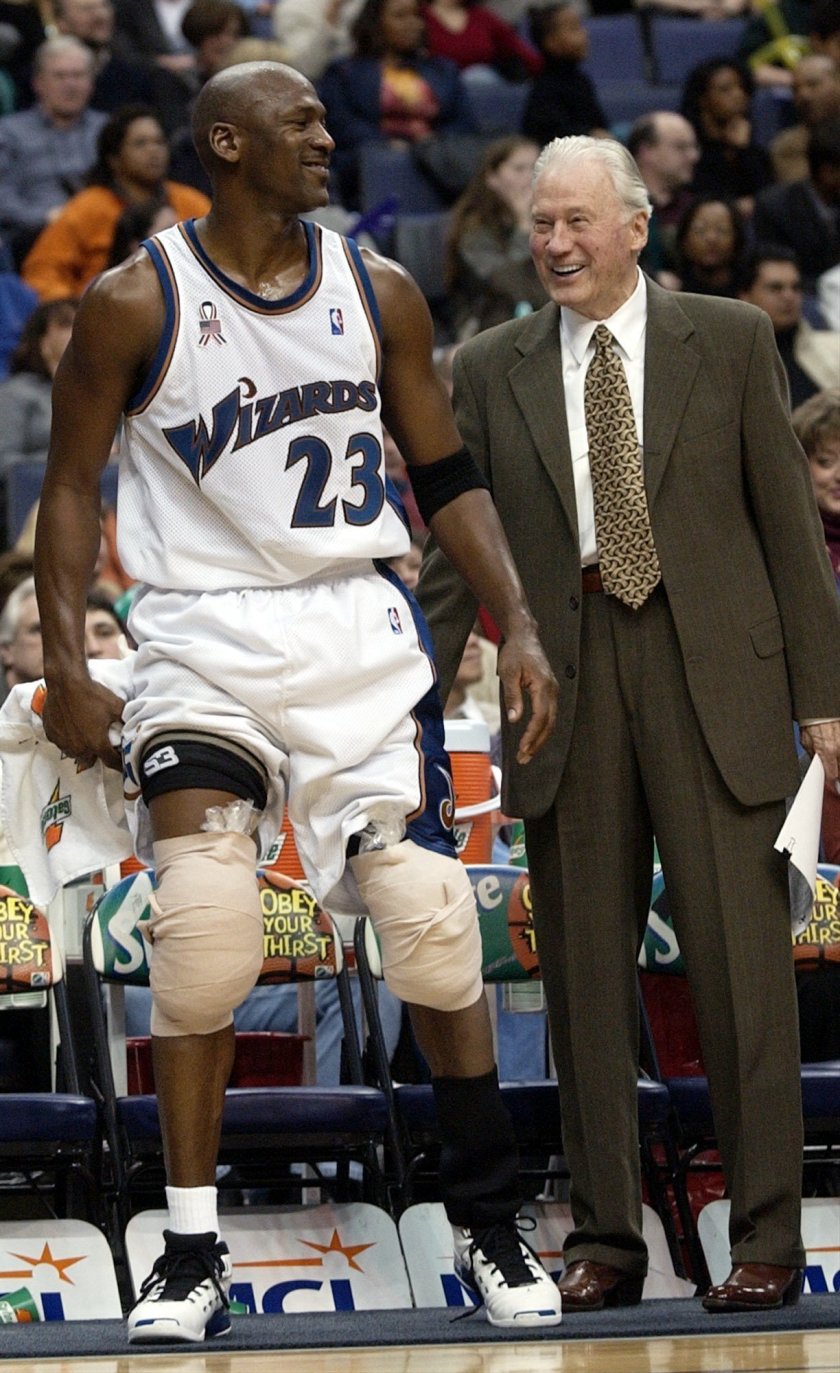 “Over the time of my ownership, I acquired additional Johnny Bach and Penn State memorabilia here pictured but I am yet to find a photo of Bach wearing the watch”

So if any of you out there find one please let us know and we will pass the information on!

The Cotton Bowl watches make a great collecting theme due to the different models and references that were awarded each year. I would love to share all you examples in a dedicated section over in The Collection, so please get in touch and share your watches!

An epic collage of Rolex and Tudor Cotton Bowl watches.