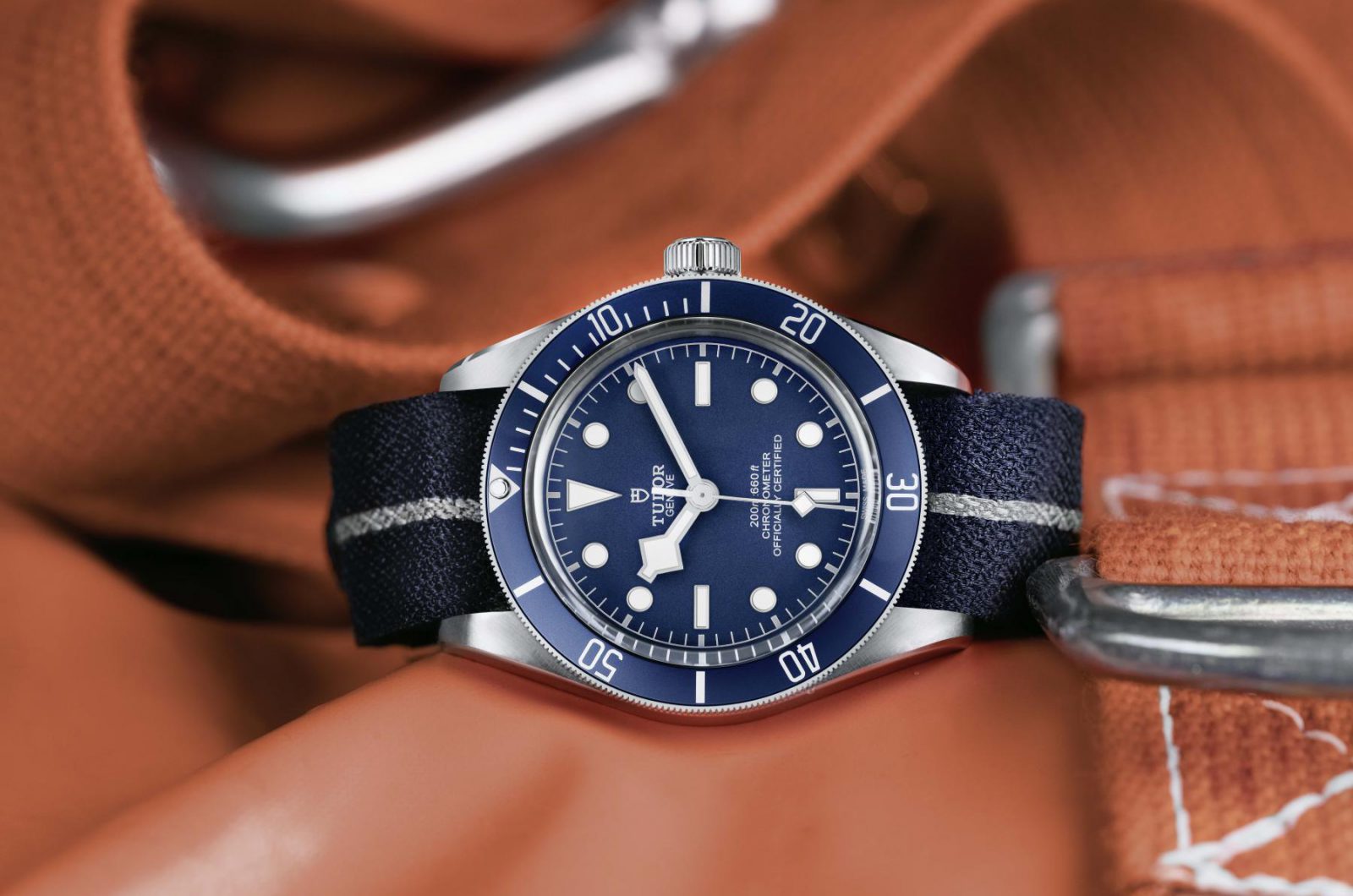 As the world begins to see blue skies through the clearing clouds of the global pandemic and enforced global lockdowns, the Black Bay 58 (BB58) has had a blue makeover and it’s exactly what all Tudor Collectors were looking for…

The Tudor Black Bay has been part of the wristwatch landscape now for eight years. And each year Tudor has delighted devotees with new ways for consumers and collectors to enjoy the snowflake hands and no-crown-guard cased dive watches. In fact, the Black Bay has even stepped out of its comfort zone and become a chronograph and a GMT watch, but maintaining its signature hands and no nonsense sports watch aesthetic. In 2018, six years after the first Black Bay was unveiled, Tudor gave the world the Black Bay 58 and with that launch, the brand entered the world of waiting lists and grey market premiums. 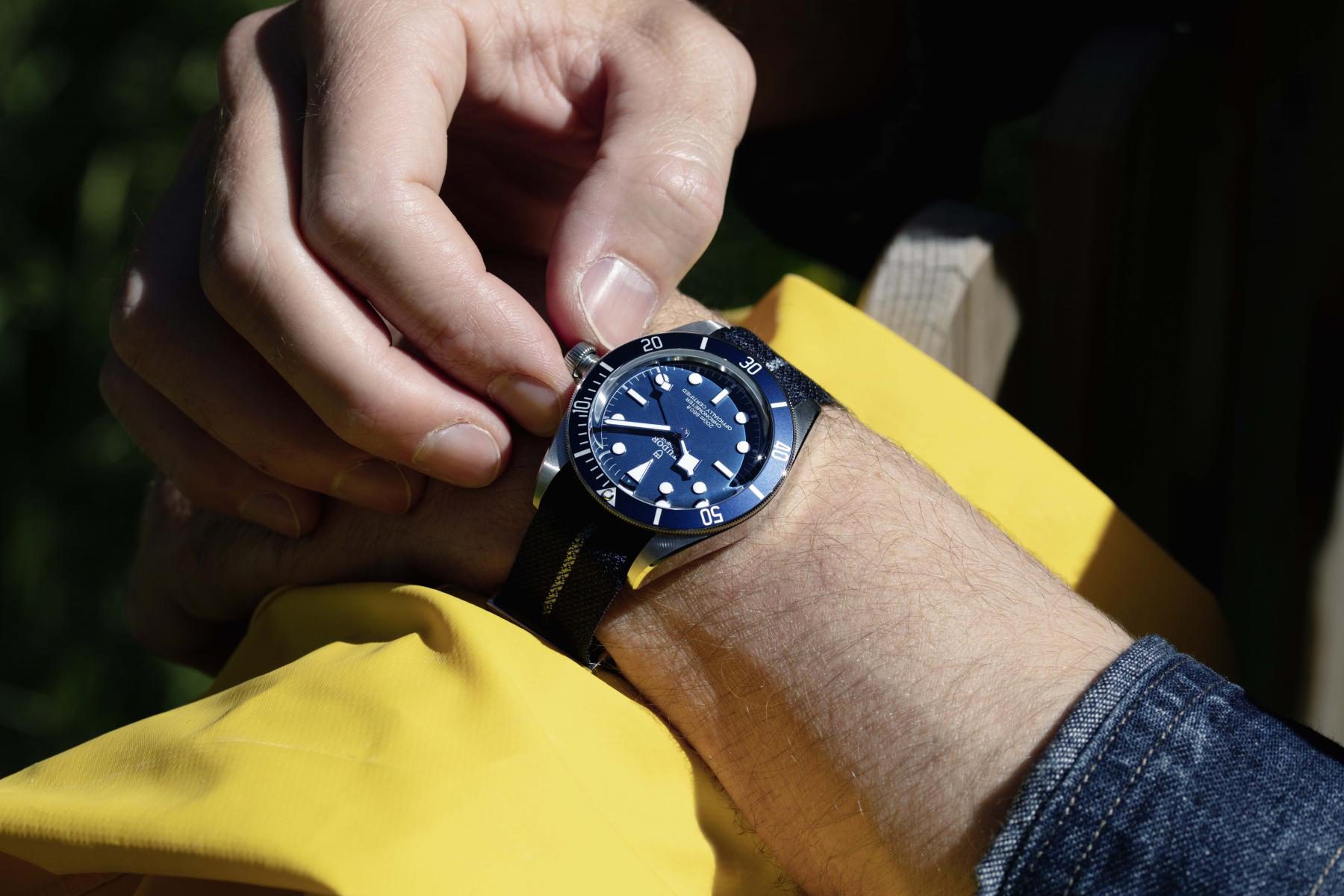 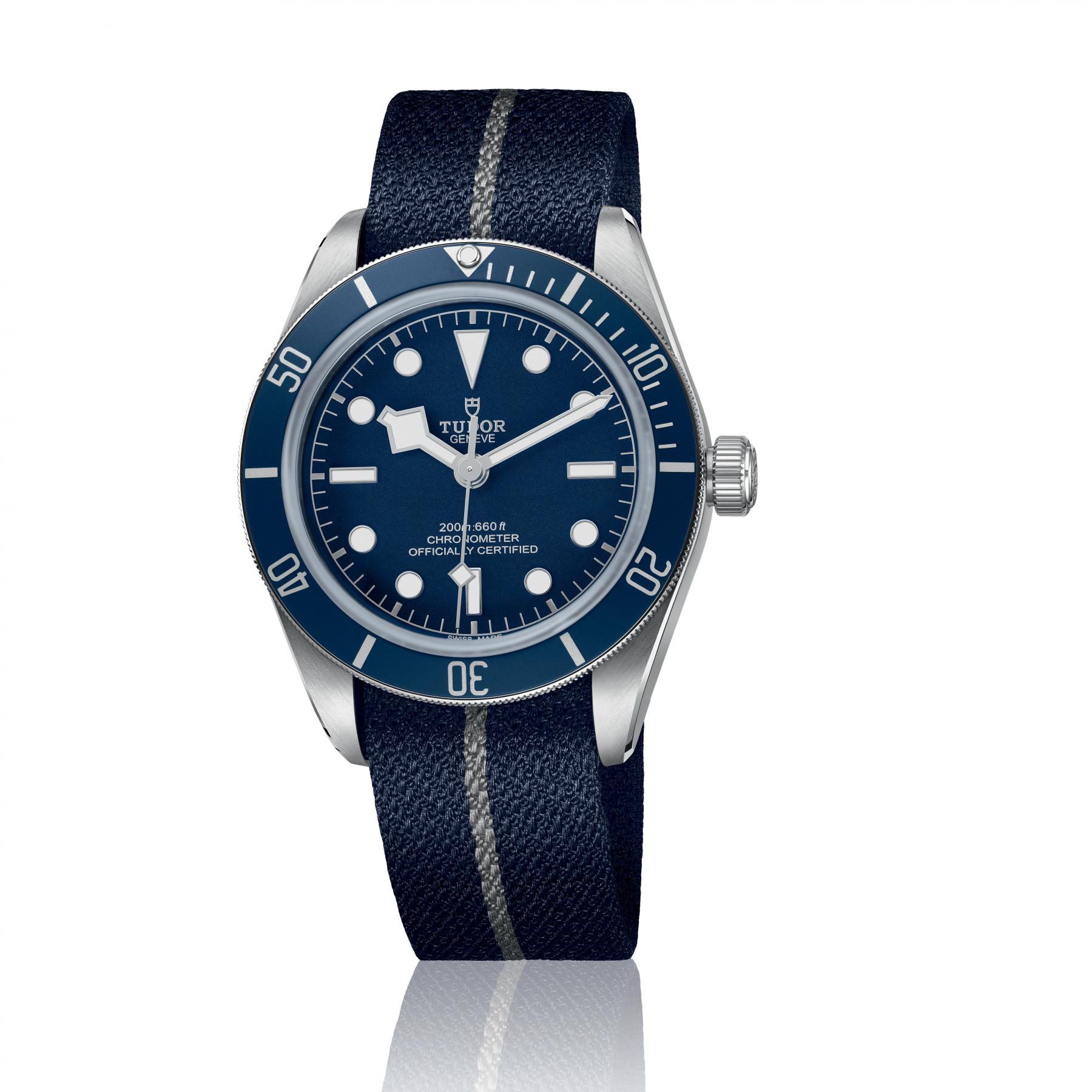 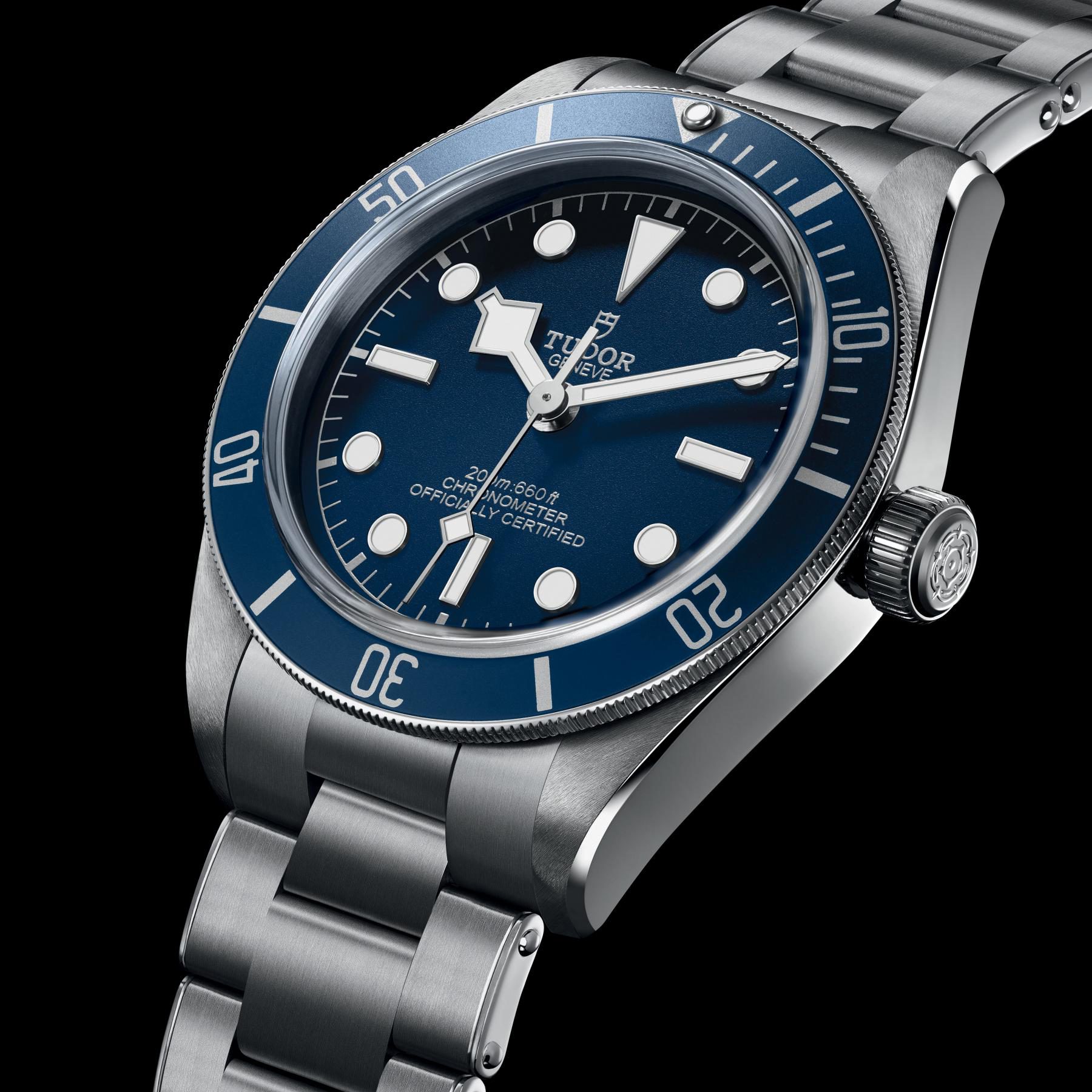 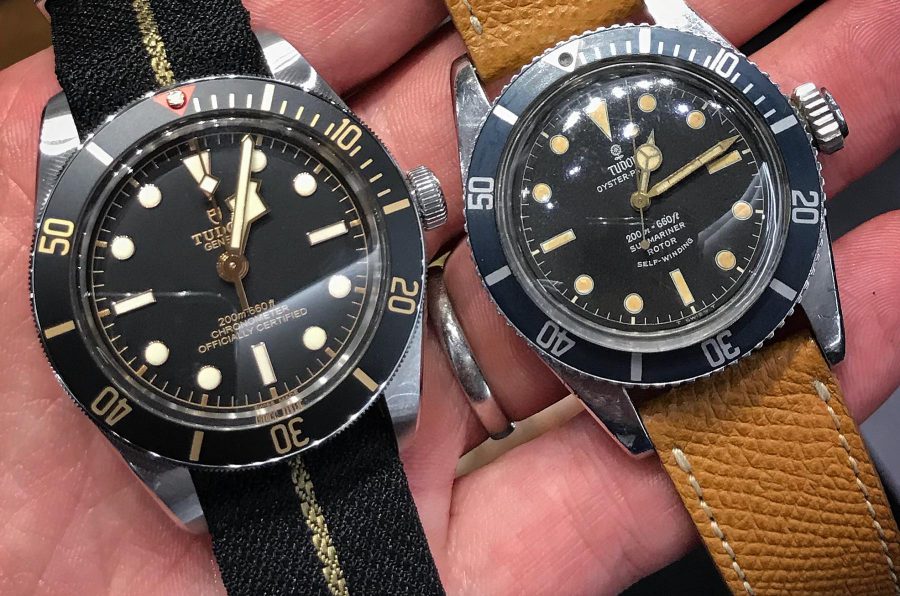 The original Black Bay 58 with a vintage 7924 Submariner 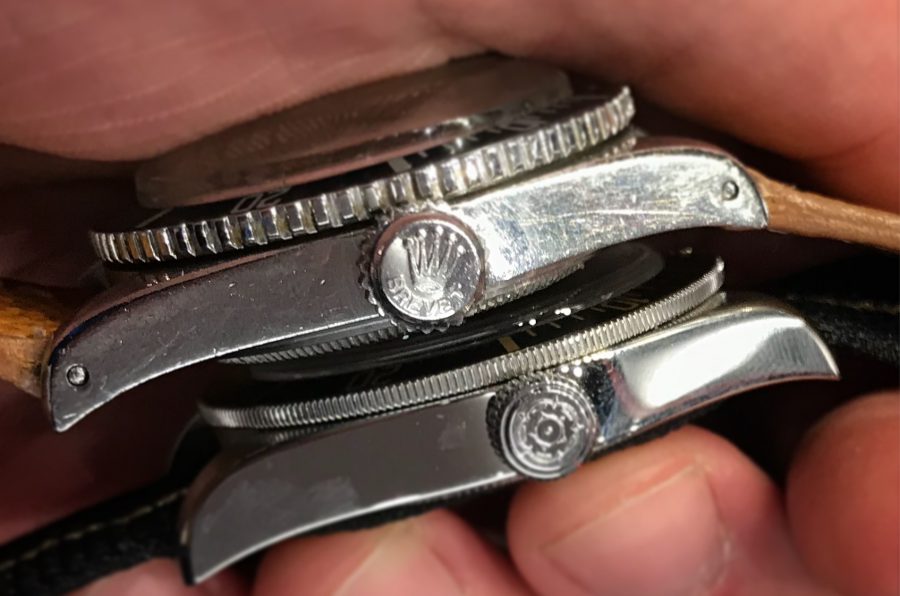 The ‘58’ in the BB58 refers to the year that Tudor launched its landmark 200-meter depth rated dive watch, the magnificent reference 7924. A 39mm steel Oyster case, oversize 8mm winding crown and bi-rotating bezel gave the watch an imposing presence and it became the go to timepiece for a number of important navies around the world, including the Uinted States, Argentina and most notably the French National Navy, the Marine Nationale. The Marine Nationale (MN) were development partners with Tudor and had been testing early prototypes of Tudor dive watches and experimenting with winding crowns and dial/hand layouts. It was this relationship that led to Tudor developing the signature snowflake hands in 1969, which enabled the military divers to have a more legible watch when diving in low-light conditions. The Black Bay 58 is incredibly faithful to the proportions of the 7924 and the watch was an instant smash with collectors. And now fans of the blue snowflake watches, whose itch wasn’t quite itched by the original 42mm Black Bay Blue, have had their prayers answered with a Black Bay 58 Blue! 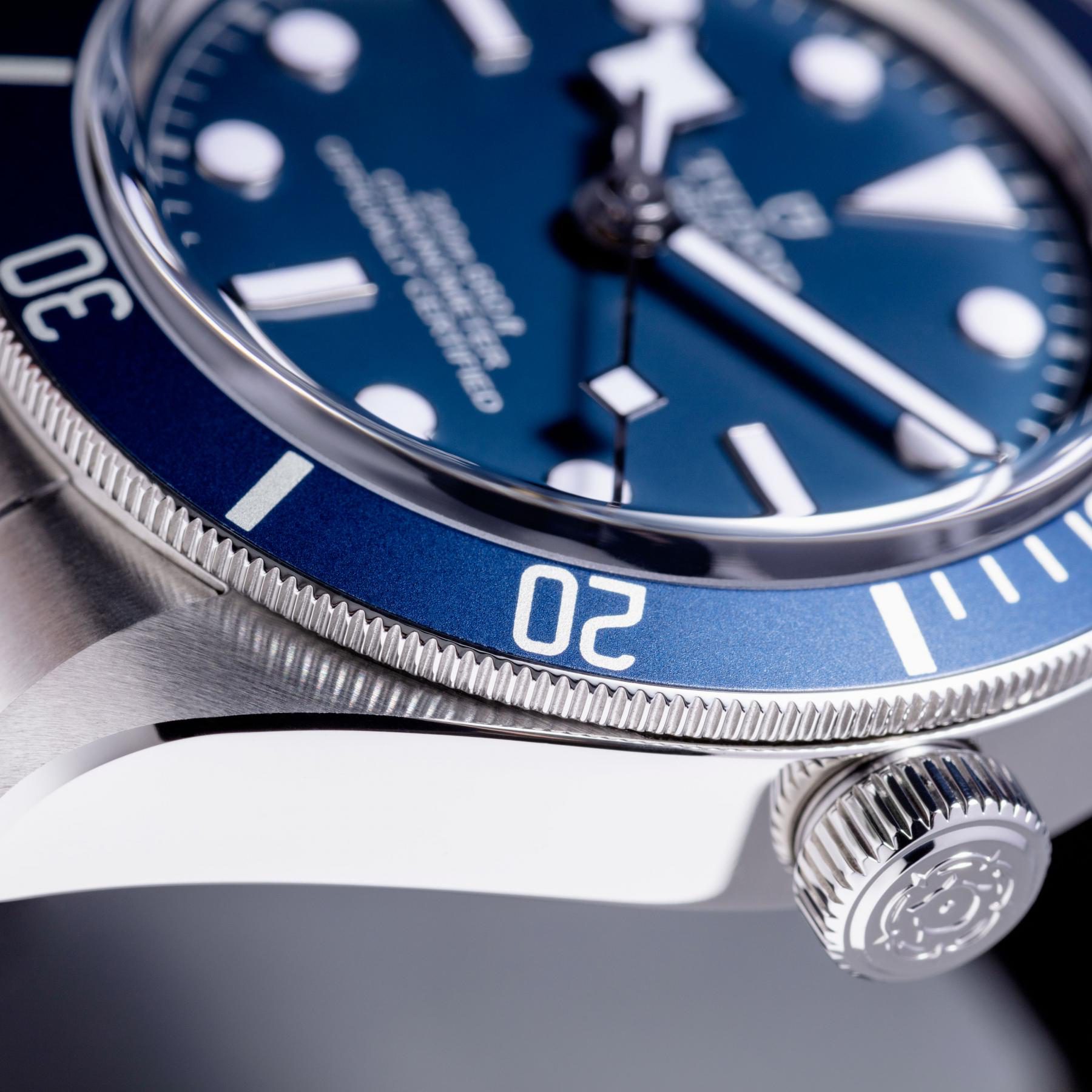 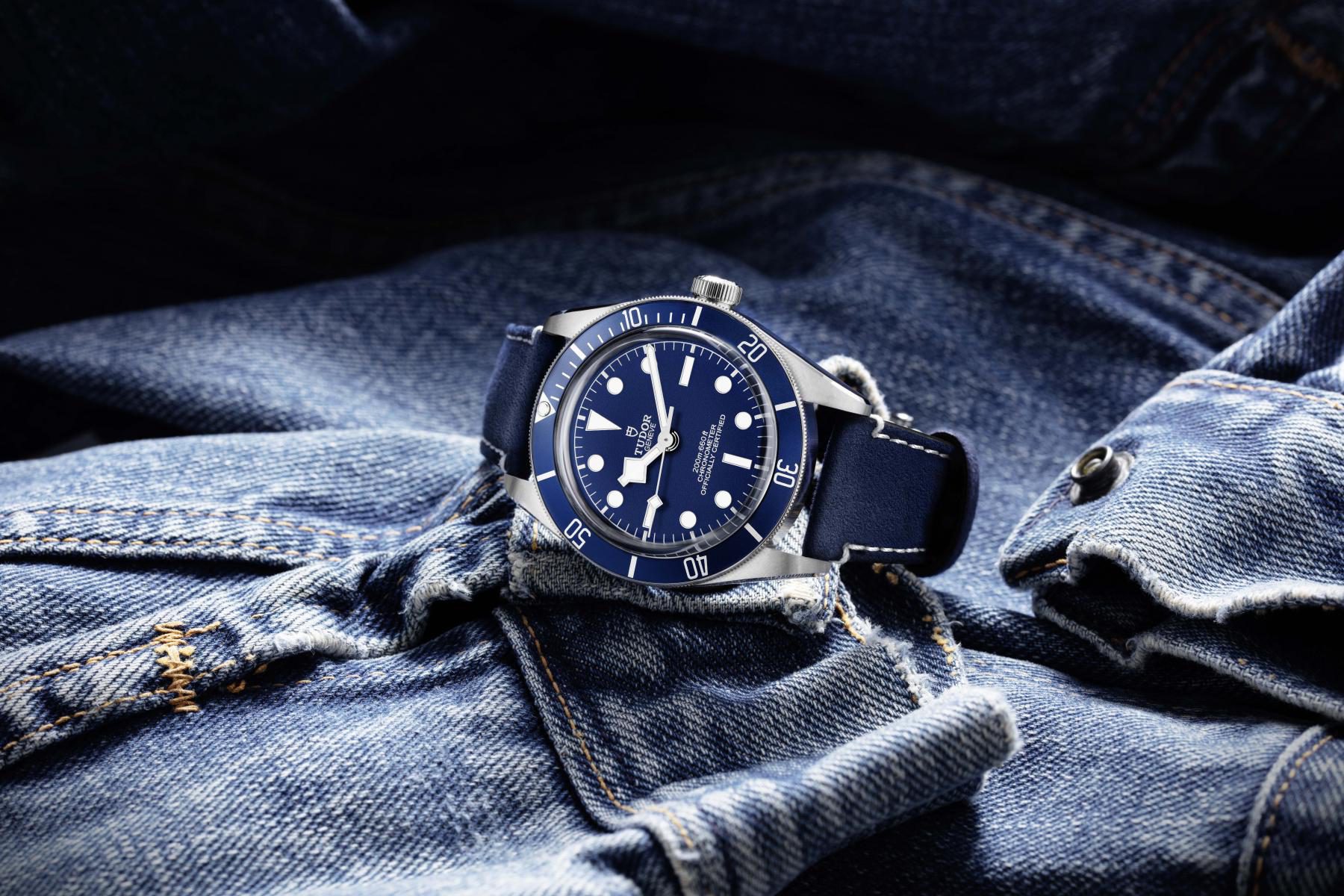 The Black Bay 58 Blue is every bit as cool as the original, with a 39mm steel case and bracelet that echoes the rivet-style bracelets of the 1950s and 60s. The original rivet bracelets were not the most hardy of bracelets, but have a very cool look on a vintage watch. Tudor’s reinterpretation has the styling cues down to a fine art and the rivets, far from being just a visual accessorily, are actually key to the construction of the bracelet. The watches are waterproof to 200m, again faithful to the 7924 in an era where it would be well within the brands capability to increase e this depth and the sapphire glass is even domed to add to the heritage charm of the watch. Where the modern watch breaks away from Tudor tradition is with the inclusion of an in-house movement. The 7924 and 7016 both used modified third-party movements – the 7924 had a modified Flurieur calibre and the 7016 a mechanism from ETA. The BB58 houses the in-house Calibre MT5402 which is COSC rated and can boast a 70-hour power reserve. And all of this comes with a five year warranty. 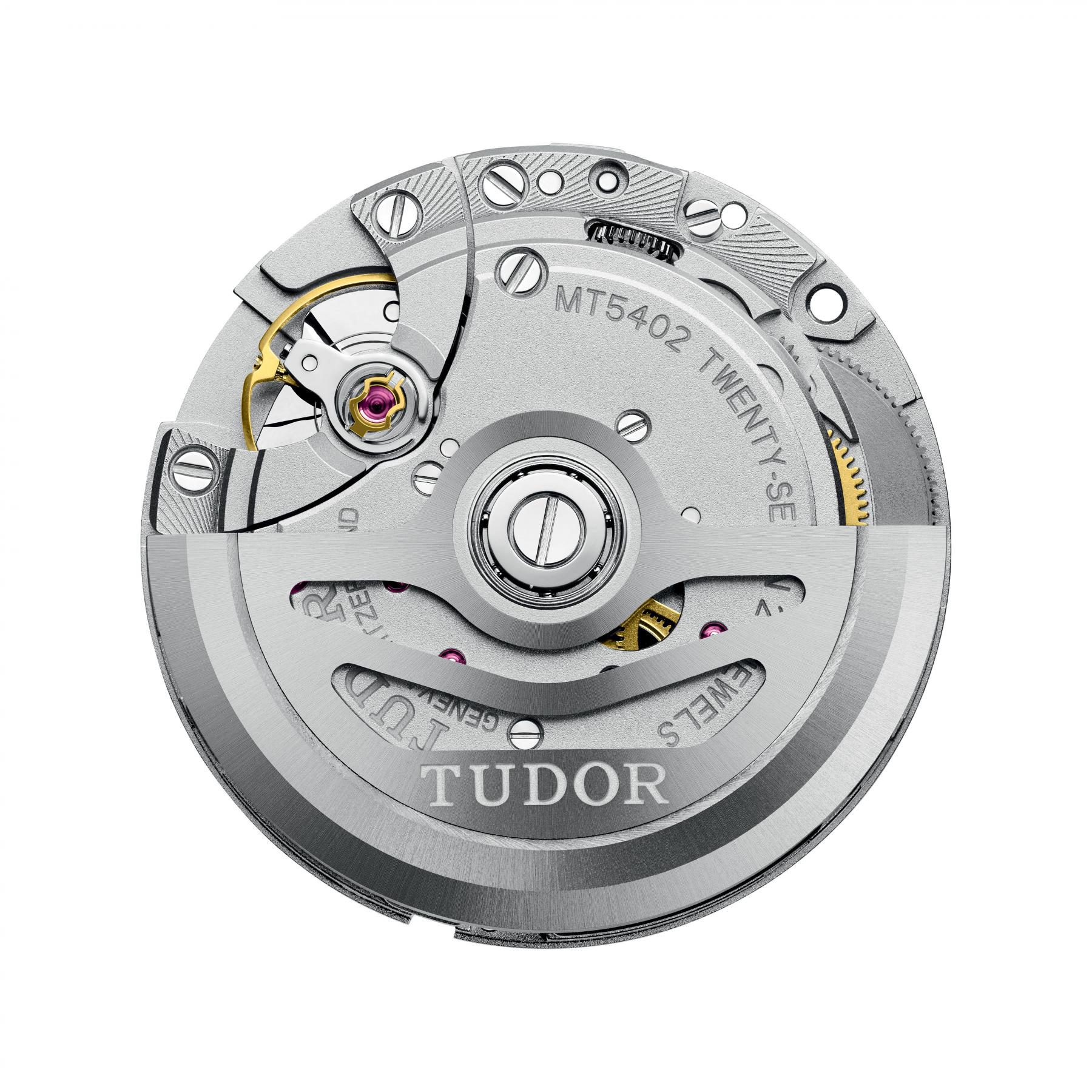 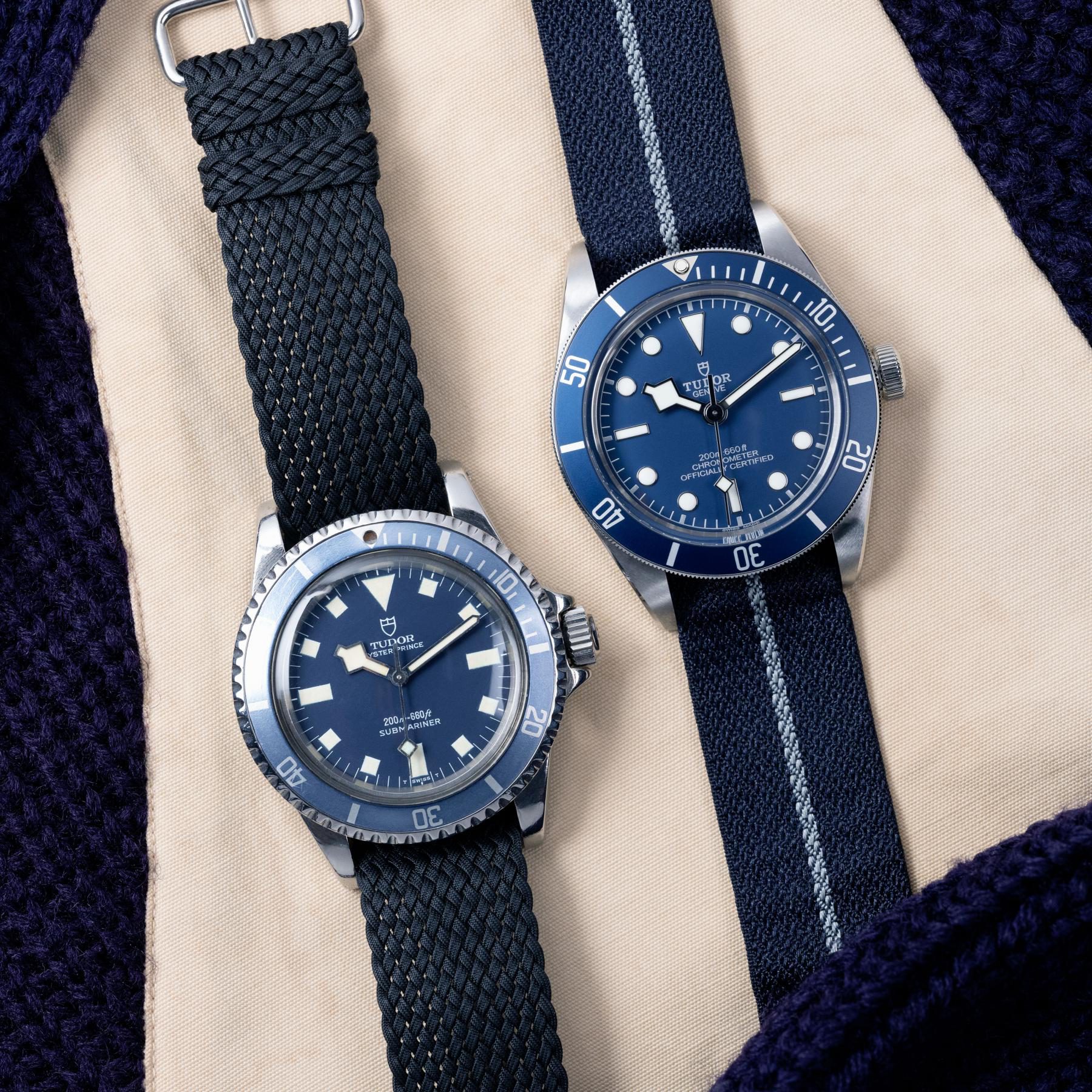 Side by side: The original blue Snowflake with the new BB58 Blue

The blue bezel and dial with the snowflake hands, combined with the 39mm shoulderless case is exactly what the offspring of a blue 7016 and 7924 would look like. And that’s a good thing! On the wrist, the BB58 has always been the watch of choice for those who lean towards the vintage watches. The original Black Bays are very cool, but are bigger and deeper than vintage Tudors, which is ideal for may modern watch buyers, especially those for whom vintage doesn’t quite pack the punch they need day to day. Sleek and low profile, the ’58 is as cool as a vintage cucumber and is slim enough to slip under the cuff of your business and robust enough to strap over your wetsuit for a diving mission…or for a dip in the sea before you head to the bar!

I think we can expect a pretty serious rush from buyers to pick one of these watches up, so I would suggest a quick call to your favourite AD to book your place on the waiting list. Because this blue bird has got wings and is going to fly! 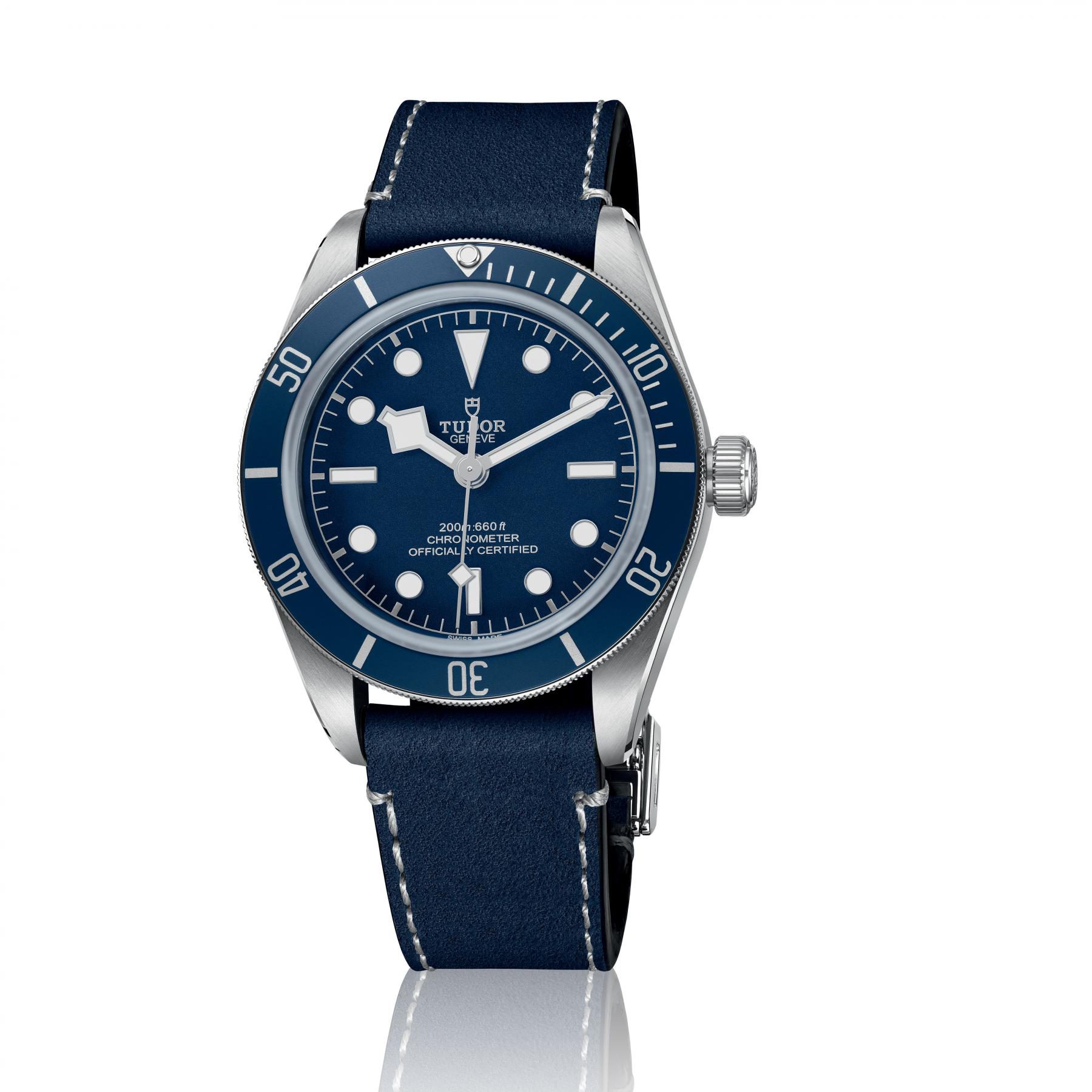