In 1970 Tudor launched the Oysterdate chronograph in two references, the 7031 and 7032. The watch was Tudor’s first chronograph and the watches were large at approximately 40mm. The Rolex Daytona was smaller at 36mm and so the Tudor had a more robust presence on the wrist. The case featured crown guards that were very similar to the very early ‘square’ guards on the first series 7928 Submariners and was fitted with waterproof screw down pushers which prevented accidental pushing during timing exercises. The watch featured a date complication at six o’clock on the dial, which had a unique acrylic cyclops crystal like none other before it; the magnification bubble was mounted horizontally at the bottom of the glass. Reference 7031 and 7032 were essentially identical with the only difference being the bezel. The 7031 featured a black plastic tachymeter bezel that was very similar to the bezel on the 6263 Daytona. The 7032 featured an all stainless steel tachymeter. It isn’t unusual to see watches where the bezels were switched. I suspect that authorised dealers allowed good customers to choose which bezel they would prefer. Additionally, the plastic bezels were more easily damaged and are now very difficult to obtain. 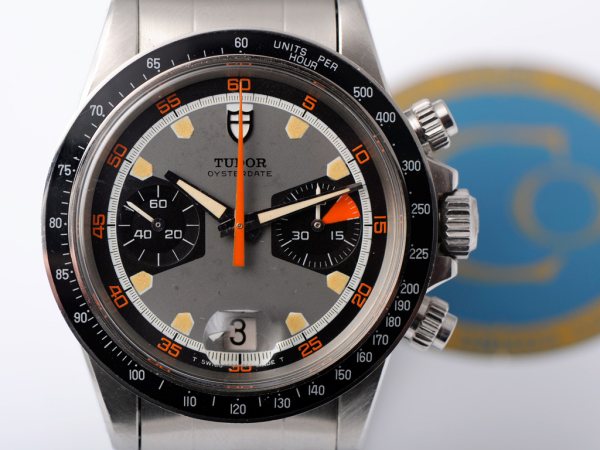 The reference 7031 with black acrylic bezel (click to zoom) 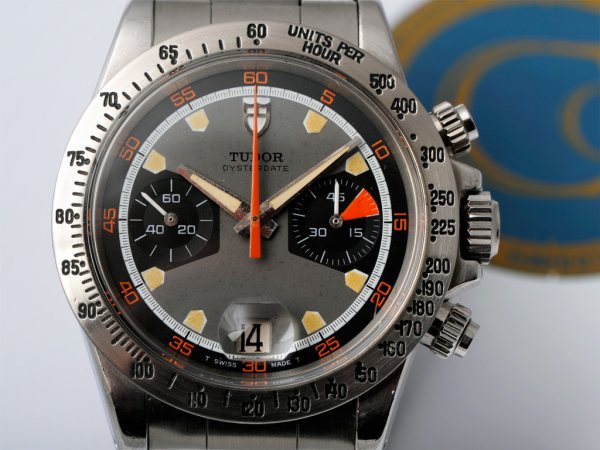 The reference 7032 with brushed steel bezel (click to zoom)

There was always the myth of a third version too, with a rotating bezel (as seen on later series chronographs). In recent years as Tudor has celebrated its past and showcased pieces from their museum archive, we have had the myth confirmed and learnt that Tudor made a prototype 7033 chronograph. This was again essentially identical to the 7031 and 7032, but featured the rotating graduated 12-hour bezel made from a black aluminium insert in a steel knurled bezel ring. Whilst this reference never made it to production, it was the inspiration for the first Tudor Heritage watch, the Heritage Chronograph in 2010. 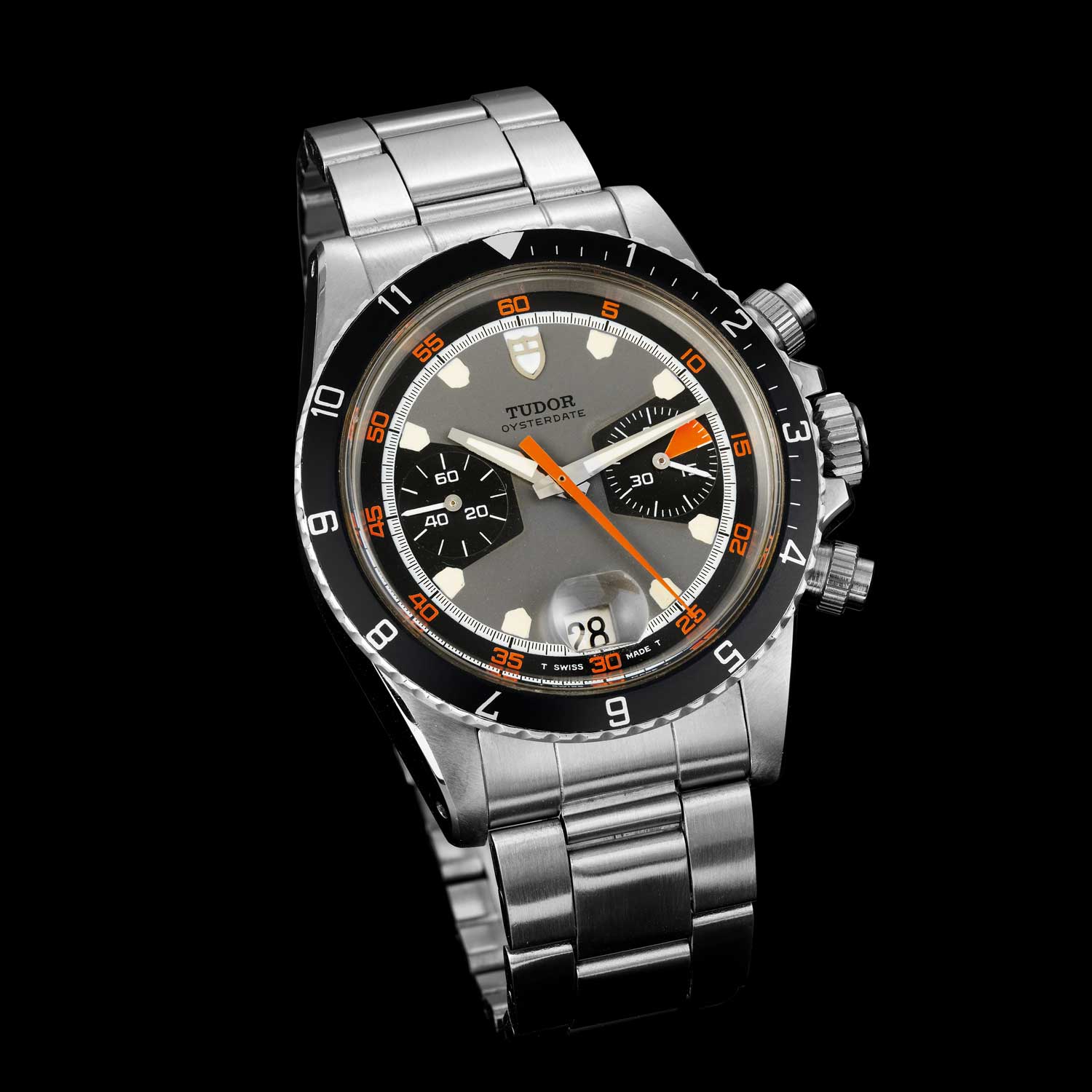 The most striking aspect of these first series chronos are the dials. Tudor opted for a design that was both bright and unusual in its use of detail. The most notable feature of the 703x watch is the shape of the hour markers, which are like the home plate on a baseball field. This led to collectors giving the watch its well-known nickname the Homeplate. The main colour for the dial was grey, with a black outer track that had five-second numerals in bright orange. The running seconds counter and 45-minute counter were black with the latter having a bright orange triangle in the 5-10 minute portion. The stopwatch centre seconds hand is also bright orange. 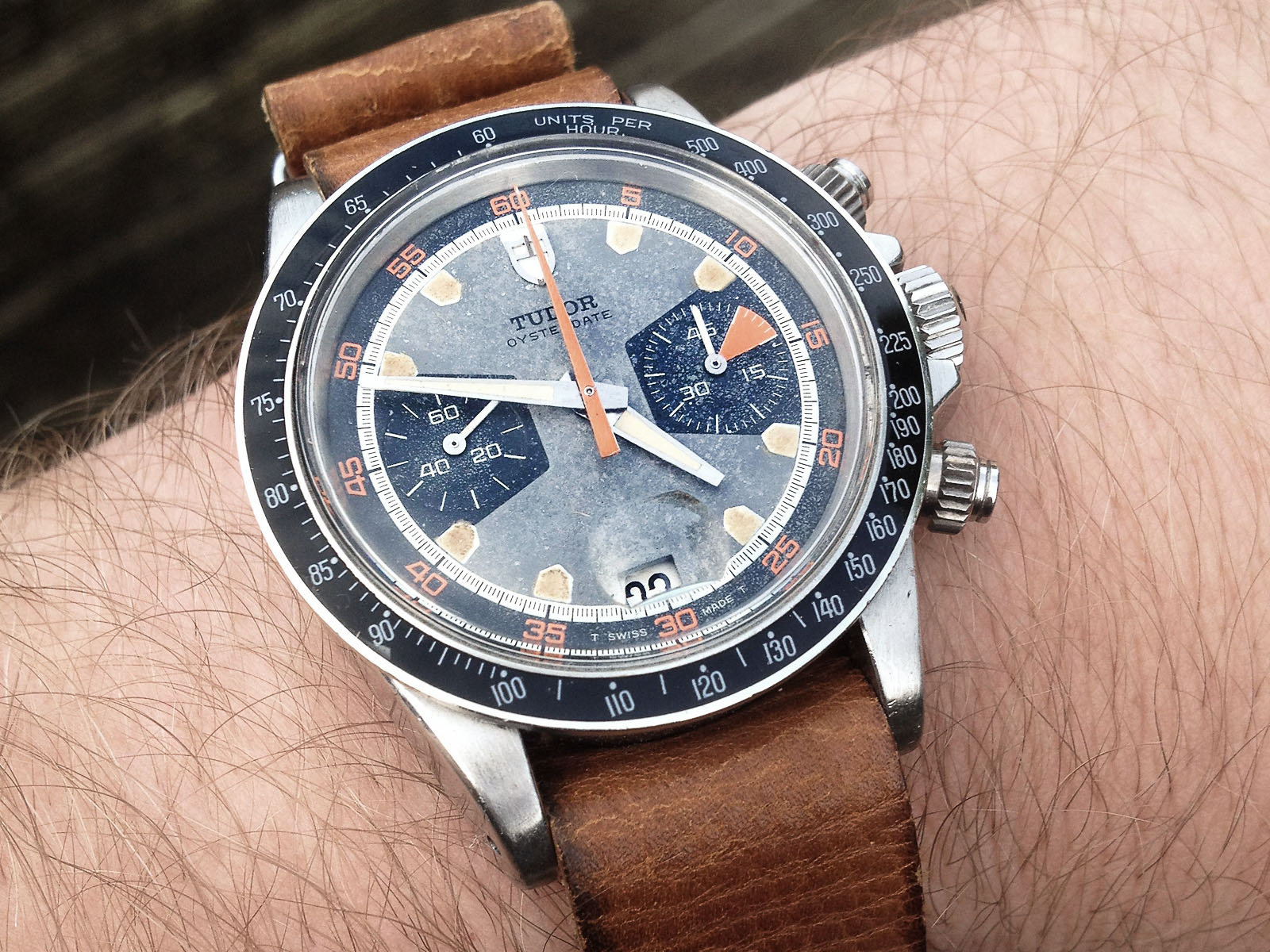 
There was also a black dialled version of the dial, which is exceedingly rare. I would estimate that there is less than a dozen examples are known of these black versions and it is a commonly held belief that these black dials were service replacements. It is quite common to see ‘spotting’ on the grey areas of the Homeplate dials and I expect that Tudor provided the more robust black versions to service centres in the same way they did with blue snowflake Submariner dials when the black ones rotted. I know of only a couple that have come from original owners, who were adamant that they were bought in this configuration. Again, maybe authorized dealers offered the black as an option to preferred clients. Either way, they are the Holy Grail for Tudor collectors. 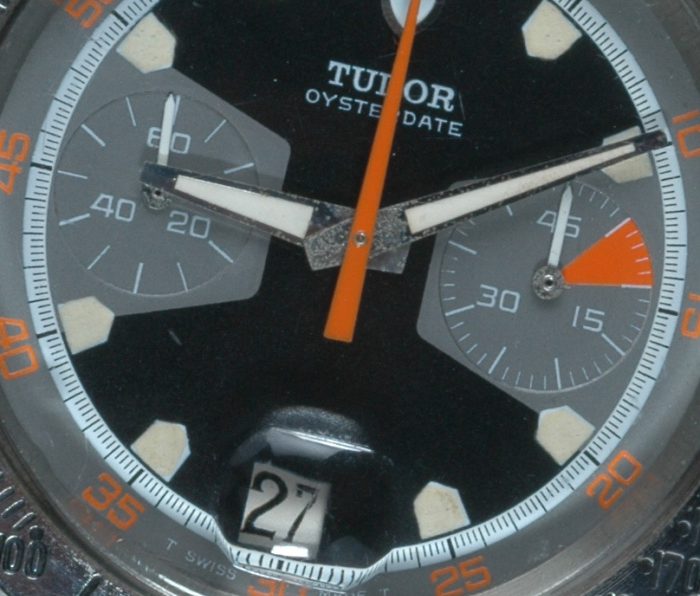 Close up of the black Homeplate dial (click to zoom) 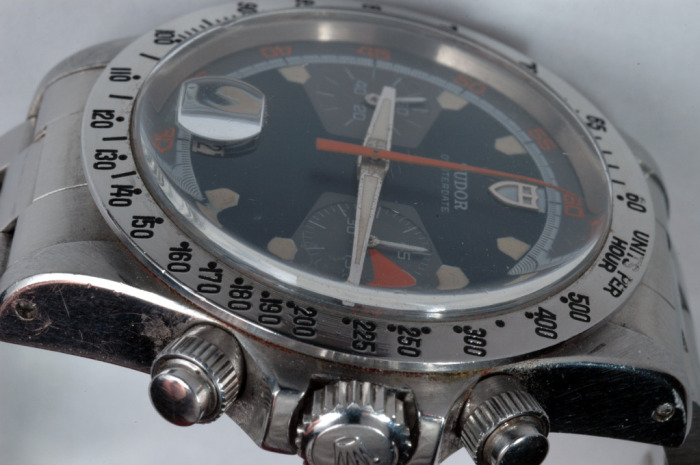 Side view of a black dial 7032 Homeplate